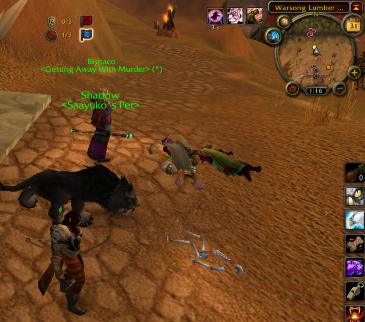 LightningEllen here and happy to be writing another post for the prestigious AmbiGaming website! This time around I’m going to be talking about online gaming experiences. I bet that triggered a few awful memories, didn’t it? Kids yelling at you in their angry squeaky voices for stealing their killz, the l33t on your team making you feel like a horrible failure because you don’t match their epic skill level, tiny alpha male trolls insisting that weak women can’t be on their teams because they suck, that random person who just hates you for some reason and won’t stop insta-killing you at the respawn point, and all that, right?

Yeah. I get it. I don’t play games online anymore for various reasons including those. I play video games to relax and unwind after a hard day in reality, not to lose what little faith I have left in humanity as a whole. I can certainly see the appeal of online gaming if you have a solid group of friends to play with. Conquering gaming obstacles with your loved ones seems like it would be a great thing to bond over! Unfortunately, not everyone has a close crew to roll with all the time (or even at all). That’s when you have to deal with randomized social elements of the online gaming community.

I just don’t get what makes a lot of people devolve into total jerks whenever they have the opportunity to hide behind a username and/or avatar. I bet some of them are decent humans in reality, just using the anonymity as an opportunity to unleash their pent up hatred on others. Whatever the reason, it’s just not nice. I wish people would remember that every avatar they see online is, in reality, a fellow human being with thoughts, feelings, and someone who has possibly spent a lifetime dealing with who knows what. Empathy seems to be a rare commodity both on and offline these days, let me tell you. But I digress.

I have done the random gaming online thing quite a lot in the past. Pre-teen me was big on Jagex’s web browser MMO RuneScape. After that, I spent 8 years playing Blizzard’s big MMO World of Warcraft (clean since 2015… but please don’t ask how many game hours I’ve logged in total over those 8 years). I also roamed around in GTA Online for an hour or two. And various multiplayer sessions of Assassin’s Creed: Black Flag come to mind. After witnessing one negative thing too many, I decided I was just done trying to play nice with people who don’t wanna play nice with each other. Thankfully, I also discovered a way to get all the multiplayer PSN Trophies in Black Flag without actually playing with other people… but I’m digressing again.

I’m not sure if there’s really anything that can be done to truly fix the social problems that crop up in online gaming communities. People will always be jerks anywhere, and that’s a sad fact of human nature. And trying to reason with a troll is like talking to a wall that just wants crush you no matter what you do (a Whomp from the Mario series, if you will). Raging at a troll just makes them stronger since that’s exactly the kind of hostility they feed on (like Rage Demons from the Dragon Age series), and the response they were probably trying to provoke in the first place.

If you want to tough it out in the random online jungle, your best bet is to make use of player-blocking and report abuse features that developers clearly put in their games for a reason. Don’t take anything personally, don’t be afraid to just log off for a bit to get away from the jerks (that’s not submitting to them, that’s putting your sanity first, in my opinion), and do what you can to ignore them in-game, as hard as that is (especially if they’re on your team or if they’re really, really good at killing you).

I do indeed have a ton of stories about all negativity that I’ve encountered online. Those bad things should absolutely be condemned and talked about rationally (as I see various bloggers do), but what about highlighting the good things that happen online? I think that if we truly want to see change in online gaming communities, it is important to give the positive points a boost while dealing blows to those negative ones. Positive reinforcement is what that’s called, I think! For all the headaches some people in WoW gave me over the years, there are several happy moments I can recall as well.

Oh the memories are flowing back now! My Night Elf Druid was just awesome to play as. She could shapeshift into various animal forms and I remember spec-ing her as a Balance Druid purely for the Moonkin Form’s silly /dance animation (For those unfamiliar with the WoW universe, a Moonkin looks like a giant humanoid bear-like bird with antlers. Sure, I could’ve shown a screenshot, but that description was too fun to not write, sorry). Yeah. Jerks constantly assumed Nightnova was a dude IRL, but I eventually stopped caring what gender they thought I was, and ignored their attempts to get me to prove I’m a woman by going on voice chat. Seriously. I really hated the whole “Man until proven otherwise” rule most idiots went on. Wait… I was going positive with this, right? See how easy it is to talk about the bad things??

Anyway and back in the day, to get the Aquatic Form a novice Night Elf Druid had to make quite a walking trek from the Night Elf starting area (a big tree in the ocean off the northwestern coast of the continent) to the Human starting area (over half a continent away and through some dangerous high level zones). I really wanted that cool seal form so I could swim real fast, but I had no idea how to get there and the high level monsters were destroying little noobie me.

Out of the blue, a random stranger noticed me struggling. Instead of laughing and carrying on with whatever important high level business he had to attend to, he stopped, said hi, and took the time to escort me all the way to my destination, while telling me about some of the areas we were passing through. When we got there, he wished me luck and went on with his quest. No words to describe the warm fuzzy feeling that interaction gave me. I’ll never forget that!

Not ashamed to say that I liked playing both sides in Azeroth’s Horde vs Alliance war. For the experience more than spying since I played on a PVE server (no open fights with the opposing faction while questing, unless you flagged yourself). My secondary character over those 8 years was on Team Horde, and I love Saayuko just as much as Nightnova. The funny thing is that since the Orc female model was considered “ugly” by most players, jerks more willing believed I am a woman IRL when I was playing as Saayuko. But I can feel my rage building with that thought, so let’s go back to happy places! What I loved about the Hunter class was the ability to tame pets that fight with you. I mostly went for feline-like creatures since tigers and stuff are awesome!

Saayuko was the character I PVPed with the most. It was incredibly fun, and probably a little unfair, to unleash my arrows and angry kitty on any “pretty” Alliance scum who dared to look down on my “ugly” Orc. WoW had something called Battleground areas where the opposing factions duked it out in various scenarios. I will never forget one epic match of Warsong Gulch I had the pleasure to fight in. For those not in the know, Warsong Gulch was basically a team capture the flag game (TL;DR version – run into the enemy’s base, steal the flag and bring it back to yours, but you can’t capture the flag if your team’s flag has been stolen too… the enemy flag carrier needs to die first). A typical game was usually over in 10-15 minutes, but this match went on for over 2 hours (this was before the patch that enforced a time limit on the games).

It was so crazy and the most amazing battle of my whole entire gaming career! I remember I constantly found myself in a direct confrontation with a Night Elf Hunter on the other team. Sometimes I killed him and triumphantly took my team’s flag back. Other times he killed me before I could capture his team’s flag, robbing me of my glorious moment. Needless to say, we had developed a very close rivalry over those 2 hours, and we really connected on some level, even though you can’t actually talk to the opposing faction.

When it was finally over, my team had lost by a hair (ouch… the sting of defeat was hard to take after all that), but I was so pumped after the match. I decided to make an Alliance character on my rival’s server to have a chat with him. I congratulated him on his victory, he told me how impressive he thought my skills were, and we spent a good 15 minutes typing about how fun that battle was before parting ways. Even though we were fighting each other, it was just such a great experience and I’ll never forget that guy! That’s the definition of friendly competition right there.

And…. I could really tell many more happy WoW stories, but I think I made my point: good things do happen in online gaming, even if all the bad things happen more often. So yes, we need to keep discussing the bad things and find ways to make online harassment stop once and for all (as impossible as that may seem to actually achieve). But it’s also nice to just sit back and reminisce about the good online times every now and then, eh?

Now if you’ll excuse me, I have to go find my willpower so I don’t resubscribe to World of Warcraft. Be strong, Ellen…

What about you, internet? Any thoughts on my thoughts? Have any happy online gaming memories you want to share? Or do you need to vent about some of the negative ones? I’m here for you either way so feel free to use comments section thingy down below!