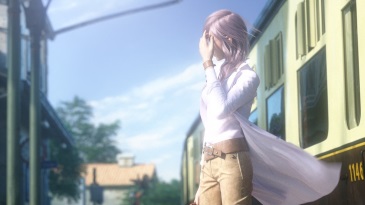 LightningEllen here and filling in for the almighty Goddess of Wisdom while she takes a well-deserved break from writing brilliant articles here on AmbiGaming. Warning: I’m certainly not a great Athena substitute, but I’ll be babbling at my best during this blog-sitting gig, eh! Watching over a best friend’s website is very important to me and I will take this task very seriously. Yeah… as long I remember to feed AmbiGaming regularly everything should be good… right??

Ahem. Let’s get to it! So Lightning-cognition will be my version of Athena’s epic Metacognition series of posts where she explores deep thoughts (and occasionally not so deep thoughts) on gaming. This week I’ll be talking about made up minigames! And what exactly is that? Lemme explain.

The first example of a made up minigame I enjoyed was in Superman 64, of all the terrible games in the world. I won’t go into a rant about how awful this game truly is, but I actually had fun with my minigame I like to call “Blocky Car Catch”. The goal was to pickup the terribly animated car thingy, fly as to the highest point in the desolate landscape, throw the car-like object, and then overcome the terrible control scheme to try to catch it before it hit the ground. I had a childhood friend visiting me when I rented this game (yes, renting games was a thing back in my day) and we took turns to see who could catch the car first. I beat him and it was legit fun! I know it’s hard to believe…

My next example comes from my 4th place all-time favourite game ever, Diddy Kong Racing on the Nintendo 64. This was my first 3D game and I played the heck out of it as a kid. Once I had pretty much 100%’d the game, more than once, I decided to undertake an important made up side mission – find out who the fastest character was. To answer this question, I took every racer through every single track and recorded their time on paper. Whoever came first the most won. In my defense, I’m an only child who lived in the middle of nowhere at the time. I had to make up my own fun… Oh and I’ll admit my results were heavily biased. My favourite characters had flawless runs, while my not-so-favourite ones “accidentally” missed a shortcut… or two.

And so many more examples are popping in my head! My childhood imagination really went wild in the those glorious games from my young gamer days. In this age of backlogs and never-ending game launches, made up minigames are something I haven’t been able to dream up much as an adult. Thinking on it more, I’d also consider the Nuzlocke challenge in Pokemon games and speed running to be more offical examples of made up mini games.

What about you, internet? What are your thoughts on made up minigames? Did I have way too much time on my hands as a kid? Do you have any examples you wanna share? I’m curious so feel free to use the comments section thingy down below!