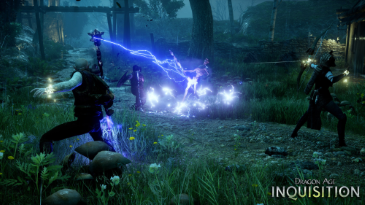 LightningEllen here and still filling in for the almighty Goddess of Wisdom while she takes a well-deserved break from writing brilliant articles here on AmbiGaming. Warning: I’m certainly not a great Athena substitute, but I’ll be babbling at my best during this blog-sitting gig, eh! The Goddess of Wisdom will be back after this post. Looks like nothing burned down, so I’ll consider this a successful mission!

Anyway, Lightning-cognition is my version of Athena’s epic Metacognition series of posts where she explores deep thoughts (and occasionally not so deep thoughts) on gaming. This week I’ll be talking about lightning! Not the cranky Final Fantasy protagonist but rather the weather event. Lemme explain.

Ever since I was a kid, I’ve been fascinated and terrified by lightning. It all started after an event in my early days. We lived in an rural area in a wide open space. One big thunderstorm, a bolt of nature’s chaotic electricity struck the power pole and the end of our 300 meter driveway. The result was a massive boom that sounded like an explosion, shook our entire house, and fried every electronic appliance inside except my Nintendo 64 (Nintendo really does make good quality products). The experience left me very respectful of, terrified, and awe-inspired by lightning. Imagine my surprise when a character named Lightning actually turned into my favourite video game character later in life!

I always get thrilled whenever I see lightning related themes pop up in games. And trust me, it happens a lot. There are so many thunderstorms that pop up on Geralt in the Witcher 3. Dragon Age Inquisition has some of the best lightning strike animations I’ve ever seen in a game when you first enter Crestwood (I jumped). Not to mention the Lightning spells and enchantments present in the entire Dragon Age series.

After Senua crosses the Sea of Corpses in Hellblade, a streak of lightning cracks across the sky before a powerful moment. Assassin’s Creed Black Flag and Rogue have massive thunderstorms that overwhelm your senses while you’re sailing along minding your own business (or plundering… yarr). Heck, Mario Kart even has a lightning item that shrinks all your competitors on the track. Oh! And OMG, the ship hiding in a lightning cloud during the Shadow Broker DLC of Mass Effect 2 was awesome. Plus Liara had a huge role in that part… But seriously, there are a lots of lightning effect examples in games!

Back to weather effects in general, I think they really add a sense of realism to games when developers add them properly. Having too many storms roll in to mess with players certainly gets annoying, but have the occasional weather obstacle to deal with keeps things interesting, and sometimes awe-inspiring.

What about you, internet? What are your favourite lightning related themes in games? Have any favourite weather effects of your own? Do you think various weather effects are important to have in games? I’d love to read anything you have to say in the comments section thingy below!