Bio: A quiet and thoughtful game enthusiast, Athena has spent most of her life enjoying a variety of video games and consoles, starting on her brother’s NES. Seeking neither fame nor fortune, Athena only writes to share her love for games and to spark intelligent conversations around them, their themes, and how they reflect our lives in the physical world.
And if you ever wanted a deeper look into Athena’s head (because who wouldn’t?), you can check out her fanfiction here in the Archive of Our Own beta.
Still not enough? Send her a tweet at @TheAmbiGamer, and check out her Let’s Plays over at AmbiGaming on YouTube! 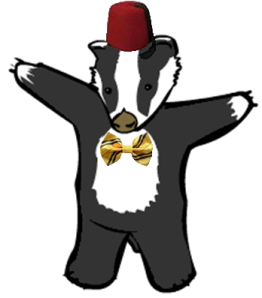 Backstory: BadgersAndBowties started her adventure by button mashing on old school arcade games and losing to her brothers in all-things-console-gaming. Those losses didn’t get her down however (well, not for long anyway), and she continued her epic quest to defeat her arch nemesis [[annoying older brother]] in literally any game at all. She thought she had completed her journey the day she finally gained victory in Battle Tanx on N64, but she realized that was only the tip of the iceberg. There were so many people to save, places to explore, and enemies to destroy. Thus she started her new journey of catching every Pokemon playing every game she could get her hands on. Now, BadgersAndBowties spends her time enjoying strategic game play, joining rebel causes, dual wielding weapons, and passively adulting.