Just for fairness sake, I’m going to not include Leliana in the running, even though she is by far my favorite.

With that as a backdrop, let’s go game by game: 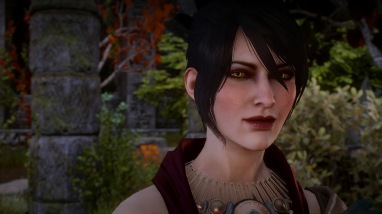 ‘Tis hardly a surprise, yes? While I loved Alistair and Sten, Oghren and Zevran, Wynne and especially Dog, this snarky witch was my favorite from her first sneered, “Well, well. What have we here?”

I admit that if I didn’t love her voice so much, I may not have gotten to know her, and then I would have missed out on such a fascinating character. She’s certainly a product of her upbringing, and has a dedication to her task that is admirable, but my favorite part about Morrigan is when the little bits of humanity slip through, and we can see that underneath the sneer and disdain is a young woman trying to figure out how to balance a heavy task and finding the life she wants for herself. It’s assumed she is fairly young in Origins, perhaps late teens or early twenties, and watching her navigate the world based on what she has been taught, and perhaps also on the life she wants for herself, is fascinating.

Oh, Nathaniel. I am victim to another great voice. He was another one where I would just sit there thinking, “Say words at me, Nathaniel.”

But in all seriousness, I loved the arc of his character, how he can go from hating the Warden (who had killed his father) to seeing that his father had, in fact, been a villain in Origins, to becoming (as I believe it) a good friend and companion of the Warden’s. He seems very steady and level-headed, and my Warden and he went on every quest together in Awakenings, both rolling their eyes at Anders (probably) and taking things way too seriously (also probably).

I couldn’t decide. I thought about Aveline, because I love the conversation she has with Hawke after Hawke’s mother dies, but then I thought of Merrill, who comes across as flaky, and has a bit of a blood magic problem, but gives solid advice throughout the game. But then there is also Isabela, who just made me laugh more than any other character. But then I thought that, more than anything, I loved when the two of these guys were in Hawke’s party, since it was so clear that they were friends.

That’s one of the things I liked about Dragon Age II so much: because so much time passes in-game, the characters can develop relationships outside of having a common quest, or just having the main character in common. And in this case, it’s clear that the elf and pirate really clicked. Which resulted in hilarious banter. And Isabela standing up for Merrill, and Merrill totally disarming Isabela with her comments.

So, in this case, they are a matched set for my favorite characters.

While I was sort of sad that the only character twist in Inquisition was that Cassandra likes “smutty literature,” I did like Cassandra quite a bit. I have a kind place in my heart for characters who are so tough but maintain their compassion and caring for others, especially since I’ve found in real life, those tend to go hand-in-hand.

Another detail that won me over was this one moment in the game when she pulled my Inquisitor to the side to have a serious conversation with her. My Inquisitor must have flirted with her at some point before turning those attentions elsewhere, but what resulted was this awkward, heartfelt, and wholly unnecessary talk from Cassandra, who was so careful and considerate when turning the Inquisitor down.

The ironic part was that I hadn’t remembered every opting for a “flirt” option with her, but there was something about how kindly she was, and how she tired to cushioned it as “not appropriate since you’re the Inquisitor,” and not “I just don’t like women/you like that.” Of course, either way is fine and realistic, but the fact that she fumbled through and was so earnestly trying to not hurt the Inquisitor’s feelings (whether or not she said the “right” thing or not) just melted my heart.

There you have it; my favorite characters from the three main games and the one main DLC (that was a game by itself!).

Who was your favorite companion character in Dragon Age? What did you like about him/her? Did you like them for stats, or their personality, or maybe their story? Let me know in the comments!