Let’s Talk About…: a game with a movie tie-in.

I actually had some fun with this, simply sitting and thinking about how many movies based on games I could think of. Here’s what I came up with:

…and I’m sure there are others. 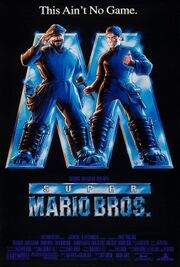 And I also realized that I’ve seen exactly none of these films. I actually tend to avoid them, since they usually receive such terrible reviews, and with Blockbuster gone they’re not movies I can just “pick up” on a Friday night anymore.

This got me thinking as to why movies based on games are so bad… and I think I agree with Roger Ebert, who once said (of Doom) that watching a game movie is like being forced to watch someone else play a game that you really want to be playing.

But Athena, I hear you type, what about Let’s Plays?

I have a theory that people tend to watch let’s plays less for “watching a video game” and more for the personality of the person they watch; it’s more akin to watching a friend play/playing with a friend than having someone sit down and force you to watch them bumble through a plot poorly, all after charging you $15.

But then again, I haven’t seen any of these movies, so I could be completely wrong. So I ask…

Have you seen any of the above movies (or any other game movie)? What did you think? Did you like it? If not, what wasn’t good about it? Let me know in the comments!