A raven appeared on the windowsill of the castle’s library, cawing softly. Athena took the letter and stroked the bird’s head absentmindedly as she unfurled the note. The writing was meticulous, but hurried, as if the writer had so much to say and wanted to get it all out at once.

Been awhile, huh? There’s been a lot happening, and I haven’t been able to write. It’s been a lot of running around the countryside, but at least it’s pretty, yeah?

We traveled to Baldur’s Gate, and boy did things get really interesting, really fast. First off, Baldur’s Gate is this huge city with a bunch of different sections, and if you’re not paying attention, it’s easy to get lost. So of course, with Daesala leading the way, we got lost a lot. 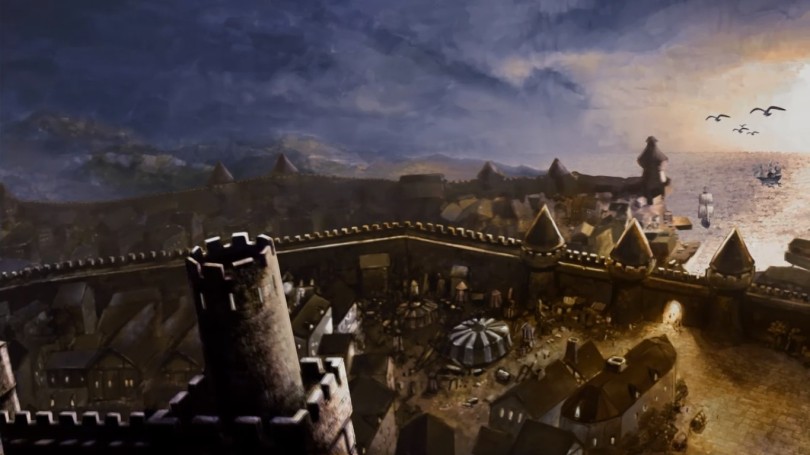 Once we were in the city, we found out who the mysterious “E” guy from Gorion’s letter was. He seemed very happy to see us, and pointed us in the direction of a few good men who could be trusted, and possibly aid us on our quest to… overthrow the Iron Throne? Is that what we’re doing now?

We met a few interesting characters along the way…

I could see this guy being friends with a kind man who has a wonderful imagination.

We almost joined a thieves’ guild, which Daesala was definitely not okay with, but we managed to talk ourselves out of trouble before anything too rotten happened. She was quite torn, I tell you, between the fact that she had given her word, and that her word was that she would break a few laws. In the end, law won out. To the surprise of no one.

As if to make up for it, we proceeded to give alms to every single beggar we came across.

Meanwhile, we crawled through the city (not actually crawled, mind you. But sometimes it was slow-going), and… the place was all atwitter with rumors and general gossip about the Iron Throne. The rich were in favor of the new management, the commoners weren’t, folks were scared out of their wits about a war that’s supposedly pending between us and Amn… the list goes on. Frankly, I’m not too worried about Amn. They’ve been quiet and peaceful with us for a while. Something fishy is going on, I tell ya.

Then the thieve’s guild apparently either forgot we were one of them, or were trying to haze us, and a woman named Wiven made a giant, horrifying face appear out of the floor…

Oh. This isn’t what you want to hear about, is it?

Well, we went to see this Scar fellow, who asked us to go adventuring down in the sewers of all places. Giant centipede-things, spiders, other creepy-crawlies… You know. Pretty standard stuff based on what our adventure has been like so far.

ANYWAY…. Eventually we get to talk to this Duke Eltan, who sends us to Candlekeep to continue investigating the whole Iron Throne business. It should have been a nice homecoming, but alas and alak, it wasn’t meant to be.

We found the leaders of the Iron Throne, all right. We were asked to leave them to their business and Daesala, not having enough evidence against them, left them to their work. We had been warned about a strange man named Koveras, and boy, was that warning good. We were eventually arrested for the murder of the folks we had left alone on the third floor! Poor Daesala never got to visit Gorion’s room. She wanted to see if there was anything he had left for her.

Anyway, Tethtoril, one of the scholars, sprung us from prison after Daesala professed our innocence. Apparently Koveras is a (really bad) code name for Sarevok, the newly-appointed leader of the Iron Throne.

You should have seen the burning hatred in Daesala’s eyes. I asked if she had known him from Candlekeep, and she said she didn’t, but there was something pulling her toward him.

At any rate, we wandered through the catacombs beneath the city in order to find a way out, and it was pretty horrific. Shapeshifters challenged us, mimicking people we knew and cared for. 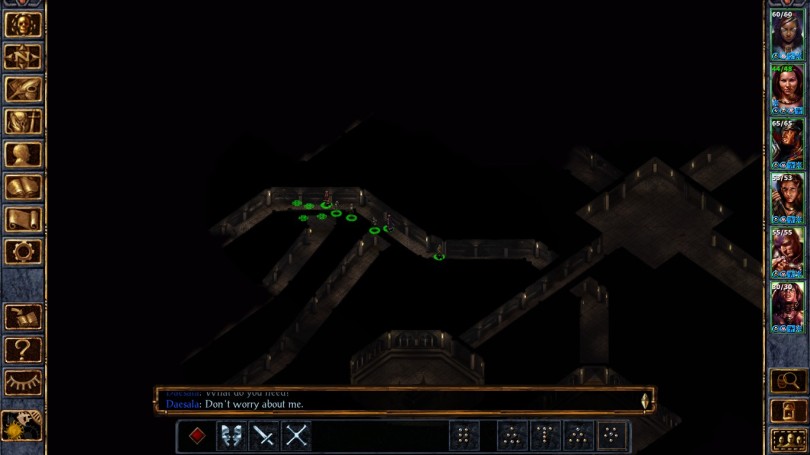 Oh, and we met a basilisk. Who knew they were real, right? 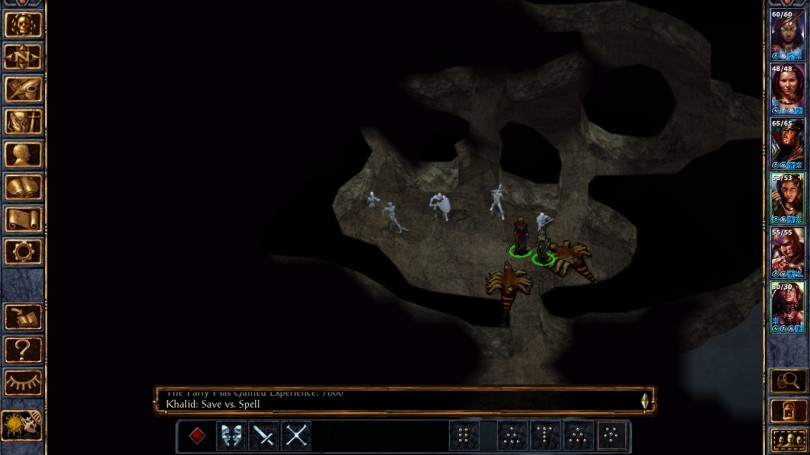 We made our way back to Baldur’s Gate, only to find we were being hunted by the Flaming Fist, now under the command of some guy named Angelo, after Scar – their true leader and our contact – was murder. Remind me not to live in the big city after this.

Needless to say, we were arrested on sight.

And sentenced to death. Luckily, we met a dwarf in the dungeon named Neb who eventually showed us out of the dungeon. Daesala refused to speak to him at first, just on principle, but after the longest staring contest I’ve ever had the distinct, boring, displeasure to watch, Neb asked Daesala a riddle, she answered, and he let us go. I guess he didn’t want us there anymore, either.

We then spent the next few days running around Baldur’s Gate because the Flaming Fist guards were not having any of that arresting thing anymore. It was kill on sight, and Daesala refused to kill any of the guards, believing them to be misguided by their leader. Khalid said Gorion would have been proud of her, but I said that I would have preferred to conduct out business in peace.

Remember how I said Scar was killed? Well, Duke Eltan was being poisoned by the guy who was supposed to be healing him, so after sorting that out, we ran the Duke to a safe location, chased by Flamist Fist guards all the way.

Then we were helped out by a courtesan named “Sugar.” Long, long, long story short, we found a guy who was witness to Scar’s murder.

We also found a courtesan who propositions Daesala, and then immediately got cold feet.

Now Daesala’s glaring at me.

At any rate, it turns out that Sarevok was trying to have himself elected as Duke, and declare war on Amn. All of the evidence was fabricated by him, the poisoned mines were orchestrated by him, the bandits, everything. Luckily, we happened to stumble in on a meeting between the dukes and some nobles just in time to reveal Sarevok’s treachery, and killed his men. Daesala tried to gain an advantage across the room, but that seemed to offend Sarevok, who taunted her for running away. If looks could kill, that guy would have been finished off right that.

Long, long, long story short, we found these tunnels under the superbly-named Blushing Mermaid, and followed the maze all around and around and around until we came to Sarevok. One of his allies, named Winksi Perorate, was left to die by the fiend’s door, but Daesala decided to spare him so he could witness Sarevok’s undoing.

Good ol’ Perorate was of the opinion that the only thing Sarevok wanted now was to fight Daesala. His plans had been found out, so she could technically walk away and leave him be.

Well. That was certainly the absolute last thing Daesala would do.

We met a woman named Tamoko, who was apparently Sarevok’s lover. She stood before us and his temple, and tried every way she could imagine to provoke Daesala, even asking to be “freed.” But Daesala wouldn’t harm her, not until she attacked. It was a sad thing, really. 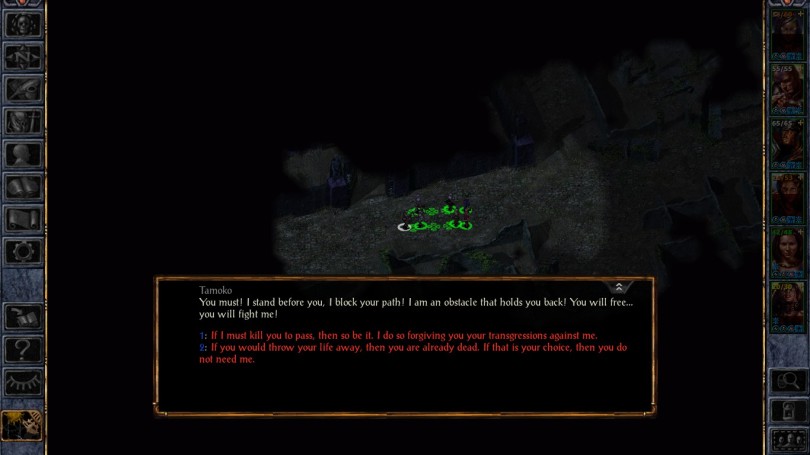 But finally the moment arrived. 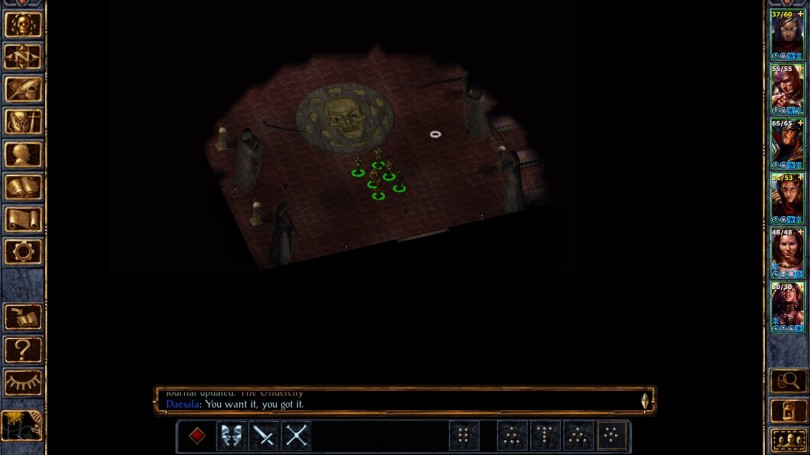 There he was. He tried to convince Daesala to join him, said they were siblings and that together they could be powerful. Daesala tried to sway him to her side of things. Neither was willing to yield.

And then it was over.

But yet I somehow have the sneaking suspicion it’s not completely over, yet. Daesala has retired to think on things, and I have done the same, but I have a feeling the world will be needing us, yet. 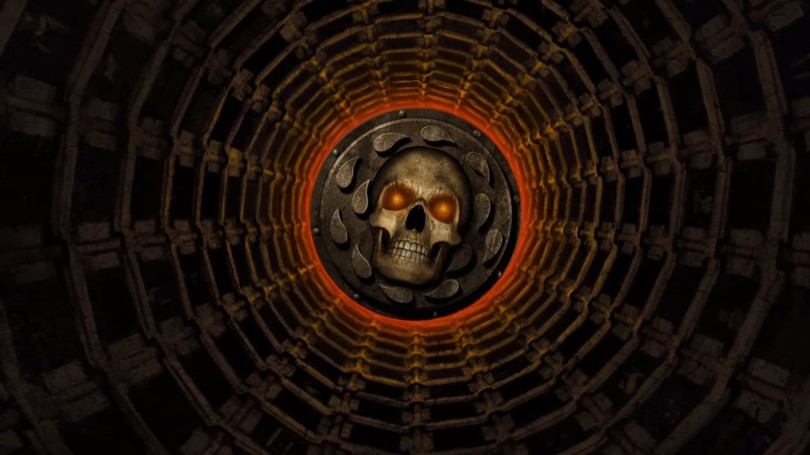 But good on you if you save the day, right?

Hope to hear from you soon,
Imoen

And with that, another journey comes to a close. Have you played Baldur’s Gate? What was your favorite part? As which alignment did you play? Who was your favorite companion character? Let me know in the comments!