What’s your opinion of the use of USA presidents in games?

Go for it, obviously. They are people, like everyone else.

I looked up a list of US presidents used in games, and a lot of times it seems that the presidency is occupied by some power-hungry crazy person. I get it; people don’t like the idea of powerful governments, and just like how powerful CEOs of corporations are always bad, so too is a(n overly) powerful head of state. As long as it isn’t slanderous of a real person, I don’t see the harm in any of that. 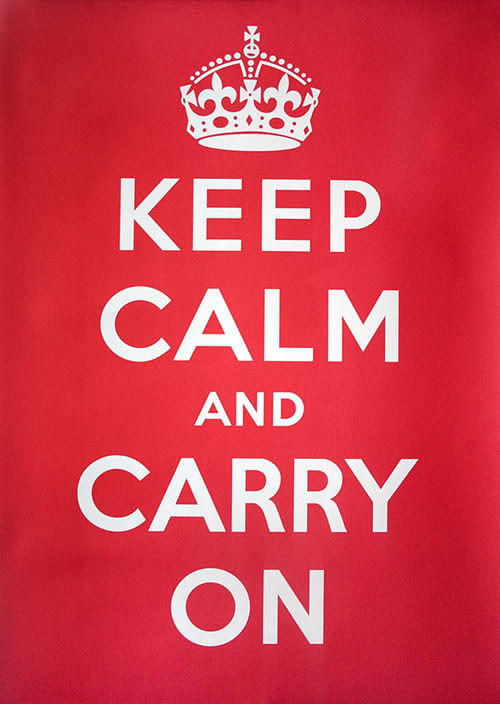 Honestly, I think the concept of a power-hungry, narcissistic president should be vilified, since that is not what the office is about. Being the president of the United States is supposed to mean the person is representing the ideals of all the country’s citizens, not just the person’s base. It’s supposed to be the person who tries to move the United States forward, ever closer to her ideals of equality and opportunity for all.

But what about games? Well, sometimes they show us what could and might be in the future. And that can be for better or for worse.

A Tale of Three Presidencies

When Perfect Dark was released on the Nintendo 64, Josh Clanton caused a small stir for being a black president. At the time, it was still a novel idea. While game events take place in 2023, the real-life first-black-president-of-the-United-States Barack Obama was elected in 2008.

Some people, to the surprise of some, I’m sure, then began looking at the prophetic prophecy that Perfect Dark purportedly professed, especially since Clanton and Obama shared some similar speech mannerisms and voice timbres. Whether that is where the similarities start or end, I won’t comment, since this isn’t a political blog.

One gaming president that doesn’t get much article-time is President James Johnson from Metal Gear Solid 2: Sons of Liberty (2001), mostly because he is eclipsed so phenomenally by former President George “Solidus Snake” Sears. But this guy… while Solidus’s fight for true democracy and a break from the shadow-organization The Patriots was actually admirable, President Johnson was a power-hungry politician who was happy to be a puppet to an organization that didn’t have the US’s best interests at heart, as long as it gave him power. 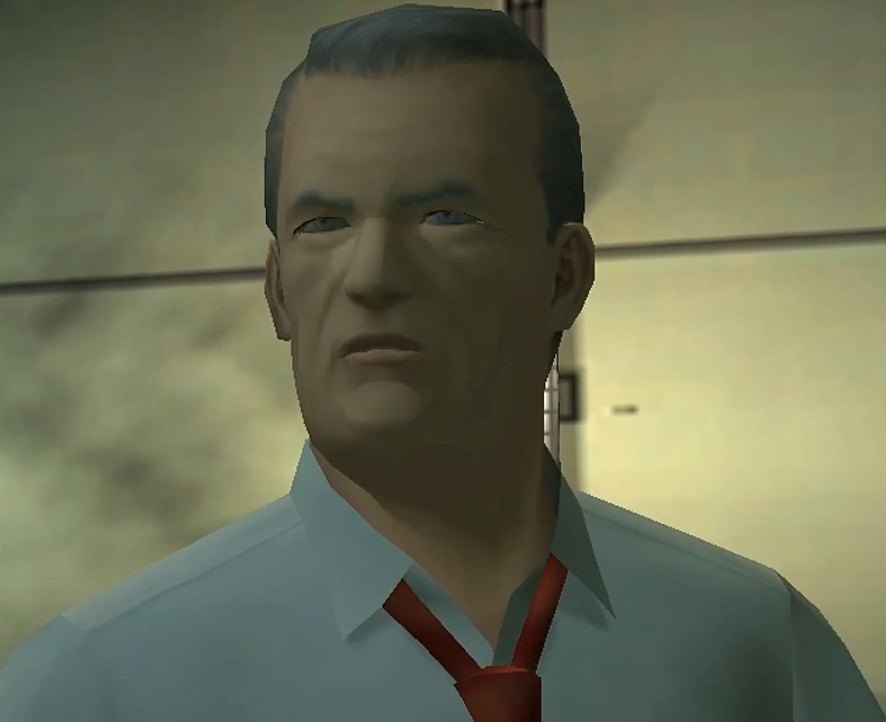 Even when he decided to rebel and join with Solidus, he hoped to do so in order to further his personal agenda of gaining even more power through blackmail. And then, in a twist not seen by anyone who hadn’t played a Metal Gear game before, changes his mind and decides that maybe the shadow organization should stay in power, after all.

You know, so he could benefit from being a puppet by keeping his presidency and his power. He is then removed by Ocelot, but whether that is good for the country or not, I’m not qualified to say.

The third president that comes to mind is Cristina Warren from Detroit: Become Human. Released in 2018 and, presumably, developed before then, Warren is an interesting case because she is neither good nor bad. She is depicted as, well, a politician. She is initially against robots but can be swayed, and there is a fun portion in the game when you can actually be her and field questions from the media. 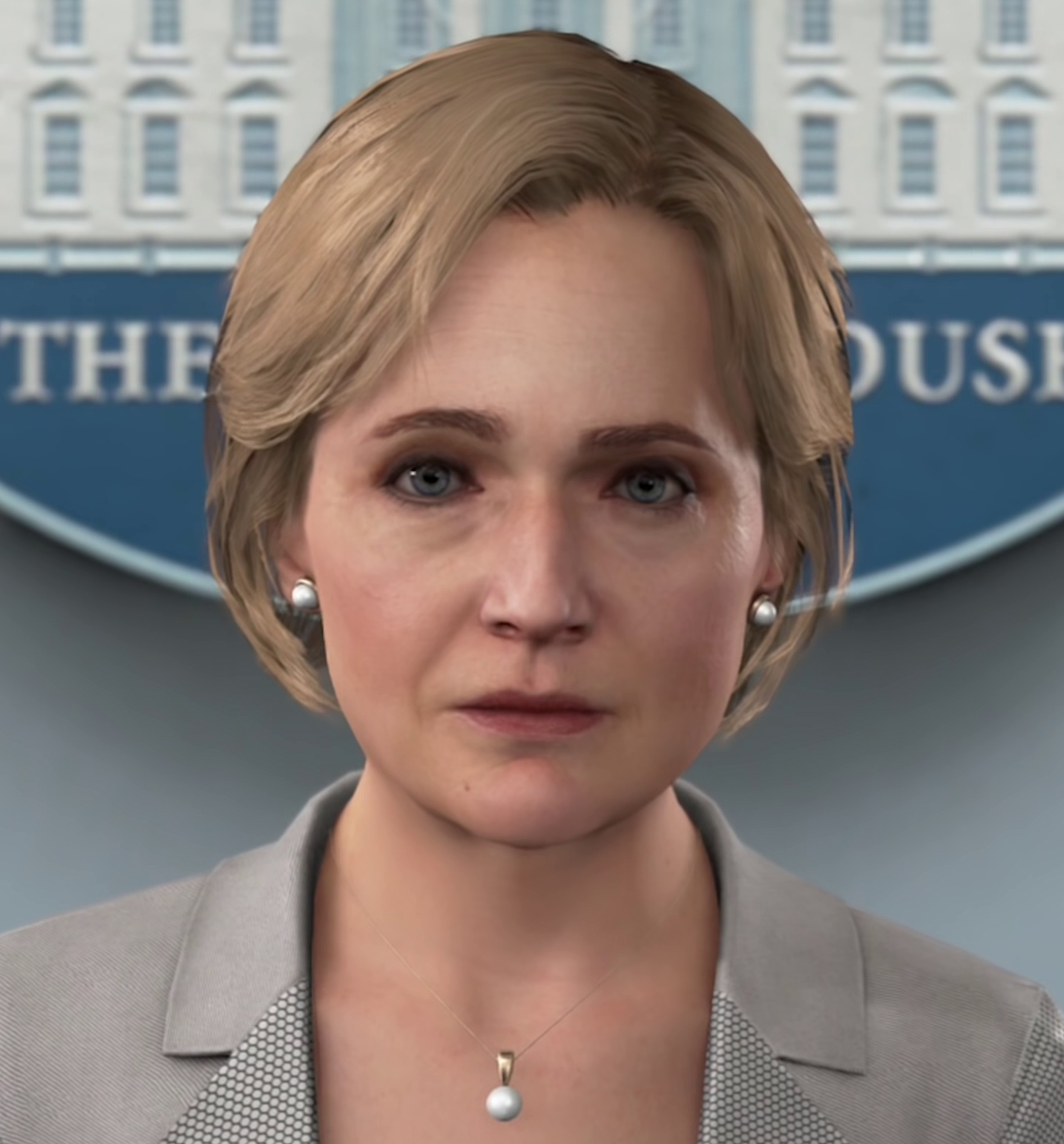 What also makes her interesting is that she has the likeness of former Secretary of State and 2016 presidential candidate Hillary Clinton and the last name of Senator Elizabeth Warren, but the social media/entertainer background of Donald Trump, 2016 candidate and current US president.

Cristina Warren was elected by a very small margin, with a victory that divided the nation, her cabinet is a disaster, and her political party is falling apart, and she has the lowest approval rating of a president in their first year in office. Her opponents say she is too close to big business, and there is a rumor that she benefit greatly from an outside source (in this case CyberLife) producing compromising information about her political opponent.

Whether that is where the similarities start or end for any other president the US has, I won’t comment, since this isn’t a political blog.

It’s interesting to look at presidents in games, at least for me, because the President of the United States is supposed to represent the entire country and her ideals, and in the physical world, whether that is true for each president varies from opinion to opinion. And so too is it in games; presidents can be overall a good person but fighting against the ideas of their times, like Clanton, or are weak leaders who thought they could do the job but maybe weren’t cut out to lead a country full of such diverse ideas, like Warren.

Maybe some will rise to the occasion, like Warren, maybe some will need some rescuing but will do okay, like Clanton, and maybe some you just hope people will come to their senses and not let outside influencers decide what’s best for your country.

Maybe this Presidents’ Day we should remember that this day was originally to celebrate the lives of George Washington, who gave power back to the people, and Abraham Lincoln, who unified a divided nation.

Who is your favorite/least favorite video game president? What do you like/dislike? Do you like when game presidents are involved in the action, or when they are just part of the backstory? Let me know in the comments!