While I am confident that more Mass Effect posts are coming, especially since some small details have – I’ve heard – been changed from the original to the Legendary Collection, today I’m going to take a lighthearted look at the artwork.

Classic. I love that it is just an updated version of the original Mass Effect cover, taking into account gamers knowing more of the characters, as well as the morality/color scheme that was introduced in Mass Effect 2, particularly the backdrop behind the Illusive Man, which changed as Shepard’s morality did..

Of course, the steel book case that I may or may not have acquired also paid homage to the opening screen of the original Mass Effect: 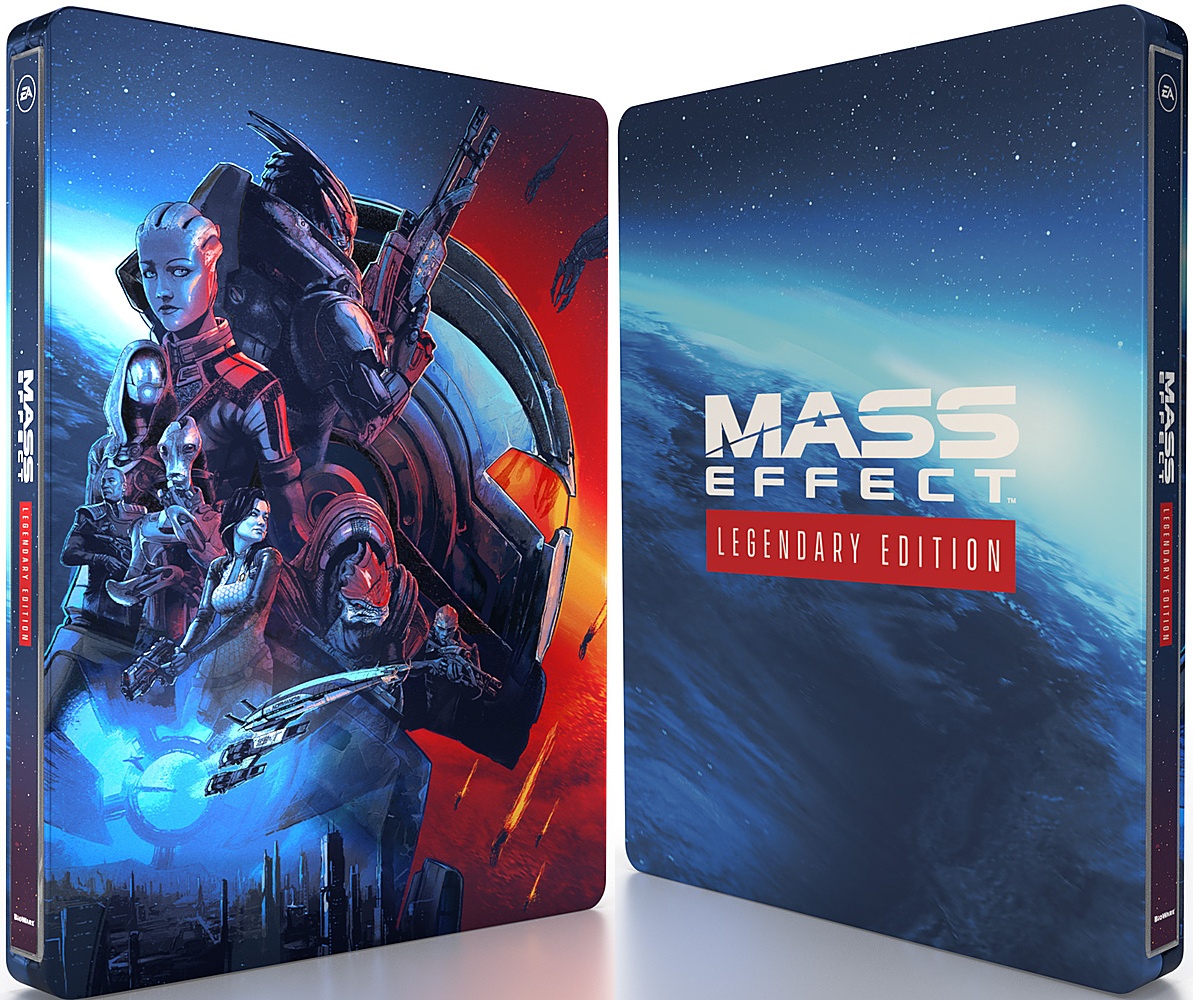 Okay, that’s cool and all, but why is this a post on AmbiGaming Corner, home of deep psychological articles and only occasional fangirling? To be honest, this wasn’t something I was going to comment on, until EA announced that they had a “have it your way” custom art creator available, in which each player could create their own custom cover art for the game.

Well, I jumped right into my Mako and zoomed right over there

…with only a few detours.

I’ve decided that my own personal cover will be:

But what struck me was not only the amount of customization available, but the way that one’s choices actually were integrated into the art.

Upon opening the cover creator, you are asked to choose between paragon, neutral, or renegade, which while influence the overall color palate. Next up you choose your two favorite squad mates, which not only determines who will be at the “top” of the picture, but, based on the order you clicked on each companion, which pose they are in. For instance, here I chose Tali, then Thane:

After choosing your two favorites, you’re next asked to pick your number one most trusted squad mate. I thought this distinction between “favorite” and “most trusted” was a really nice touch, as this lets the player determine for themselves what both of those terms mean. Is “favorite” the one you bring everywhere? the one with the best stats? the ones Shepard would never betray? And what about “most trusted”? How is that different that your favorite? What does it mean to you? And thus within our art, we begin to mold – or reflect – our Shepard’s character.

After getting your faves, crushes, and/or trusted friends sorted, the next three squad mates to pick are the “cavalry.” Again, the order you pick them determines their position.

Every good squad needs some good backup. With such a vague descriptor, the player is again free to define for themselves what that means. Are they the squad mates that Shepard took only for specialized reasons? Or maybe they were the ones that your Shepard liked least, but appreciated the stats for.

And finally, the player is asked to choose a location, which will be featured in the body of Shepard. There are five key areas: the Citadel, the Collector Base, Eden Prime, the invaded Citadel, and Omega. The placement of this in Shepard’s body seems to indicate that it’s an area of significance in Shepard’s story, or one that was meaningful to the player

I thought it might be fun to just quickly go through my picks, since there are so many different options and combinations. I noticed that for my picks, I focused mostly on the people that Shepard had the best relationships with, instead of stats or even the people I brought with me on missions the most.

For example, Tali and my canon Shepard were best friends, and of course you all have followed my tragic love story with Thane, so they were easy picks for a Shepard “squad.” Ashley, as controversial as she is, is one my personal favorites, and that was reflected in how I played my canon Shepard, too, so after the squad there was no one else Shepard would rather turn to in a pinch for some straight-talking advice.

The calvary of Liara, Miranda, and Garrus was interesting, because these were squad mates I took often, and my Shepard definitely called them friends, but they weren’t the first ones that Shepard would have personally gone to.

Similarly, the backups were people I knew had Shepard’s back no matter what – Samara and Jack – and were, interestingly, not the squadmates I used very often.

And, of course, I chose Eden Prime as the “important location” because that’s where this whole journey began, didn’t it?

Back to the Art

Now let’s take a look at the original artwork again:

A reasonable choice was making this post one of the “neutral” color scheme, in order to acknowledge either the varied play styles of fans, and also the fact that Shepard does often do some morally questionable things when being a paragon, and some objectively good things while being a “renegade.” Likewise, the image within the body is the Citadel, which is the heart of the games and the story, serving as the final battle scene in Mass Effect and in Mass Effect 3.

Which brings us to the characters.

I also found it fascinating (but not surprising) that, with the exception of Zaeed, who is hidden between Tali and Mordin, all the characters depicted are in the top 10 list of Mass Effect characters.

Of course, a development studio would want to make sure to take an “average” of their fans when designing a cover for a game that so many were excited for, and putting fan favorites in prominent roles would certainly do just that. While I couldn’t find any data on the point I’m about to make, being in the fandom for a bit has me agreeing with this image as a good “showing” of fan characters.

Let’s go through the picture, in the order that the characters were chosen (as per the programming of the fan’s art creator):

Garrus (1) and Liara (2) are by far fans’ favorite squad mates and romance options. Tali (3), the quarian who acted like a sister to Shepard throughout the series, is the trusted companion. Mordin (4), the singing salarian assassin who wants to run tests on seashells, Miranda (5), whose behind was featured in more game frames than probably Shepard’s face, and Wrex (6) the krogan who barreled into fans’ hearts, seem like obvious choices for the cover, if not exactly my personal definition of “cavalry. Thane (7) and Zaeed (8) are the backups – strong characters who get the job done, and fall in different “favorite character lists” depending on personal preference.

While writing this, I kept trying to think of something profound to say about it, other than the level of detail and thought that the developers put into the cover and the subsequent cover creator available to fans is really… nice. In a world where it’s so easy to deride developers for this or that, I really appreciated that BioWare and EA seemed to recognize at some level (even if at only the profitability level) that this is a series that is immensely important to fans, and they found a way to help fans celebrate their own unique connections to the trilogy.

What about you? What do you think of the customizability of the cover art for the new Mass Effect collection? Even if you’re not a fan of Mass Effect, who would you put on a “dream squad” of your own? Let me know in the comments!

PS For those of you wondering how the renegade option looks: