I started researching this topic a few weeks ago, actually, and it spiraled out of control and became an enormous tome-like document, so I’ve decided to break it into three parts.

Part I (this one) will discuss the different kinds of choices that we as humans make in a day, and the psychology that goes into making those choices.

Part II will delve into how and why choice matters in video games, or if it matters at all. We’ll also talk a little about the illusion of choice in games.

Part III will finish up this mini-series with an examination of morality choices, specifically in comparing morality bars to more nebulous “moral” choices in video games.

A Choice Made, a Decision Finalized

What is a choice? In our most extreme definition, everything we do that isn’t controlled by our autonomic nervous system is a choice. But let’s take a step back. What do we choose, and what do we decide?

I tend to differentiate choices from decisions in video games. This is going to get a little particular, but bear with me. A decision in a video game can be based on a mental calculation. For instance, you might know or infer the results and you decide whether the consequence is “worth it.” Most behavior modification theories are based on this idea of antecedent, behavior, and consequence (sometimes referred to as “ABC.” A few studies are linked at the bottom). In this case, the antecedent would be the presentation of the choice (for instance, choosing party members in an RPG game) and the consequence would be the stats that your party would have. Your behavior (or choice) is a calculation: is it “worth” having two mages if it means I have to leave my tank behind?

This is exactly how we make decisions in real life. For instance, if I’m your boss and I tell you to attend a meeting on Sunday morning at 4:00am and I would pay you a bonus of $10,000, but wouldn’t punish you for not attending, would you do it?

You would decide which consequence is more appealing to you, or whether the antecedent is “worth” a “yes” response.

But what if I instead said that the Sunday meeting was at 4:00am, in a town 500 miles away from you, and I’d only give you a $100 bonus? What if I said if you didn’t show up, you’d be fired? What would it take to get you to the meeting?

This is a calculation, a decision.

A choice, by comparison, is something that makes you pause and think. The answers aren’t nearly as mathematical, and often pose conflicting information so you must switch from your logical, calculating brain to overcoming some kind of internal conflict. You’re now having an emotional response to the situation. As such, you’re now trying to regain homeostasis in the face of conflict, rather than just crunching numbers. Additionally, you might not know the consequences of your actions, adding pressure.

For an example, some people had to choose between leaving behind Hawke and Alistair in Dragon Age: Inquisition and expressed distress over it, since the one left behind might or might not die (I had a different choice because of how I played the previous games, but it’s a good example anyway).

Hawke was the playable character (designed by the player) in a previous game, and Alistair was the goofy, loveable sidekick/romance from an even more previous game. Both characters (usually) evoked positive feelings from the player, and the player was invested in both of them. But no math or stats here: which one do you choose to send to their almost-certain death? 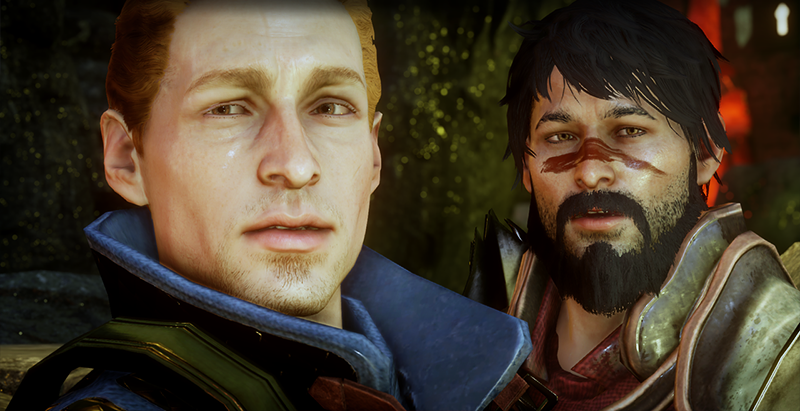 For a real life example, I’d look at the trolley dilemma, a thought experiment in which you see a trolley coming down the track. As it approaches a fork in the tracks you see 5 people tied to one path and one person tied to the other. The trolley is headed straight for the 5 people, but you have time to flip the switch, which will result in the single person being killed but saving the other five. Do you flip the switch? What if you had to (for whatever reason) physically push someone in front of the trolley to stop it from hitting the five people? Would you push the person? What if it was someone you knew?

This is a choice. Emotions and morals have come into play and the scenario has far surpassed a simple calculation of “Is getting up very early in the morning worth $10,000?”.

The game might be devious in other ways, too. It might not give you all the data you need to make a decision and require you to make a choice quickly, sometimes forcing you out of your usual pattern of play (say, having to break cover and run after Meryl in Metal Gear Solid because you don’t know if she’ll disappear forever if you don’t catch her. Or, chasing after the mushroom in Super Mario Bros without knowing what baddies are going to pop up).

Alternately, the game might offer a faster path to the player, fraught with exponentially more enemies than the slower path, like in Metal Gear Solid: Snake Eater or Guns of the Patriots. Now the game is pitting the player against him or herself; the player might want to take the path that is most time-efficient, but doing so could cause an in-game consequence they don’t want (being spotted and shot at, in this case).

One of the more interesting (but less stressful) choices are when you are given a choice between two things you as the player want, but you can only have one. Dragon Age Inquisition drove me up a wall with this with the Inquisition Perks – you could only choose one, and there were options for upgrading how many items you could carry, to increasing how many experience points you’d receive for “X” behavior, and so on.

So there are many ways that games offer players choices and opportunities for decisions during play. But what does all of this mean when put in a playable context? Do the choices actually matter? Are more choices better? What do we mean when we say (if we say) we want “more choices” in video games?

What do you think? Is there a difference in the kinds of choices we are forced to make in video games? What are some of the hardest choices you’ve made? The hardest decisions? I’d love to hear your stories in the comments!

Stop by next Monday for Part 2 of this series, where we’ll discuss when and why choice matters in video games. And come by this Wednesday as we delve into theology and the world of Thedas.

Until then, thanks for stopping by, and I’ll see you soon!

For more on the ABCs of behavior modification:

For more on the trolley dilemma: