My inner voice aside, today the Video Game Challenge wants to know:

So full disclosure: these challenges have not been posed as questions. I can usually figure out what the “question” is, but here I’m stumped. Do they mean a single voice actor that is particularly talented, or a game that overall has particularly memorable voice acting?

Well… why not both? PixelDump Gaming wrote a fantastic article a while ago about some of the best voice acting in games, and so I encourage you to head on over there and check it out, since his list is much more extensive than mine will be.

This is way too broad and I don’t like the question. So…

Name one game from each console that you owned (and that had voiced characters in its games) that had particularly memorable voice acting.

–Playstation/PSOne – This might sound weird, but I really liked the voice acting in Grand Theft Auto III, even though Claude is a silent protagonists. I remember thinking it was cool how the characters sounded like they were in a mobster movie, and I never thought the acting sounded stilted. I’m not sure if that means the game had objectively memorable voice acting, but coming off of things like Crazy Taxi and Spiderman, I was impressed.

–Playstation 2 – I really, really love Solid Snake, and I really, really love Metal Gear Solid 2: Sons of Liberty, and both of those things happened on this console (haha). But the game was so wonderfully campy, like a Saturday morning cartoon, yet so serious at the same time, and I thought the array of characters fit the premise of the game. I can easily pull up each character’s voice in my memory, and Solid Snake’s overly-action-hero voice had the right balance of seriousness and cartoonishness so his lines just worked well.

–Playstation 3 – It seems too easy to say the Dragon Age or Mass Effect series. I can’t remember any line seeming incredibly out of place. But I’ll keep my love of BioWare out of this… 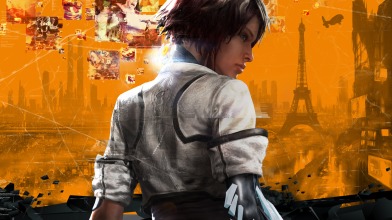 I actually really liked the voice acting in Remember Me. Nilin had some weird lines sometimes (“This little red riding hood’s got a basket full of kick-ass” being one of them) but she delivered them well. Across the board I thought all the voices fit, and I loved that Edge sounded so human and so forlorn, for reasons that would be a spoiler if I talked about them.

–Wii – I actually had to check my games for this one. I admit I wasn’t a real Wii connoisseur, so unfortunately my library for this console is pretty limited, but by process of elimination, the top spot goes to The Last Story, simply because it has the most voice acting of the games that I have. Some of the delivery was stilted, but that was less to do with the talent of the actors and more to do with how the programmers spaced the lines, resulting in awkward pauses in between sentences as characters conversed.

–Playstation 4 – I haven’t played much Uncharted 4, but what I’ve seen/heard has been very impressive. As of right now, though, I think I’m going to go with Horizon: Zero Dawn. My reason is terrible: I actually expected the voice acting to be really awful, and that the directors would somehow try to have the characters sound “tribal” and just ruin everything. No, I don’t know what “tribal” sounds like, other than my belief that the devs would garble the lines as they tried to find that “sound.” 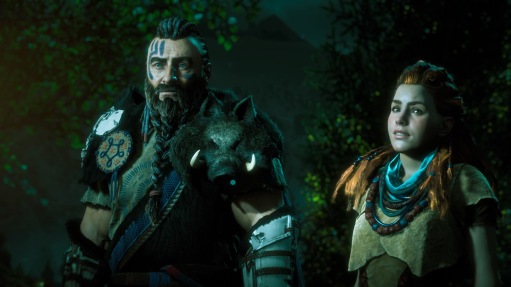 Also, considering how the characters don’t fully open their mouths when they talk, I like how Ashly Burch works that in to her lines, placing a lot of the words in the back of her mouth as if she were really speaking through her teeth (but not in an angry way).

Name one voice actor/actress who you think is a cut above the rest.

Oh, how I um’ed. Um how I oh’d. Do I pick David Hayter for his great, cartoony action-hero voice? Or Nolan North for the sheer volume of games he’s been in? Or Kiefer Sutherland for stepping into Big Boss’s enormous combat boots to take him in a less cartoonish direction? Or do I pick Alix Wilton Regan or Corinne Kempa because I could listen to them read grocery lists all day and still melt into a happy little puddle of fan goo?

No, no. If there is one voice actress I wholeheartedly admire, it’s this woman: 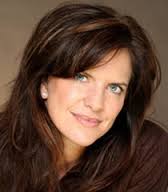 Jennifer Hale. I’ve loved her voice ever since I first met Naomi Hunter in Metal Gear Solid. And my appreciation for her talent grew when I re-met Naomi in Metal Gear Solid 4: Guns of the Patriots, and she sounded so different. If I hadn’t known it was the same actress, I wouldn’t have guessed it. And then someone told me that she also voiced Emma Emmerich in Metal Gear Solid 2: Sons of Liberty… and I knew I had to find out more. There was no way Naomi and Emma were voiced by the same person. But they were, and then I went through a whole list of voice acting credits, and…

She’s really, really talented. Now that I know the characters are voiced by the same person, I can pick out similarities (for some), but otherwise… not so much.

Who would have thought that Naomi Hunter, Commander Shepard, Avatar Kyoshi, and Princess Morbucks were all voiced by the same person?

Again, I highly recommend you check out PixelDump’s article for a longer list. It was hard to pick just one…

What about you? What voice acting in a video game has really blown you away? Let me know in the comments!