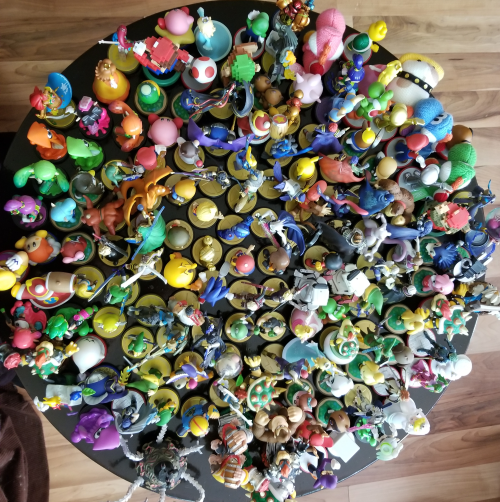 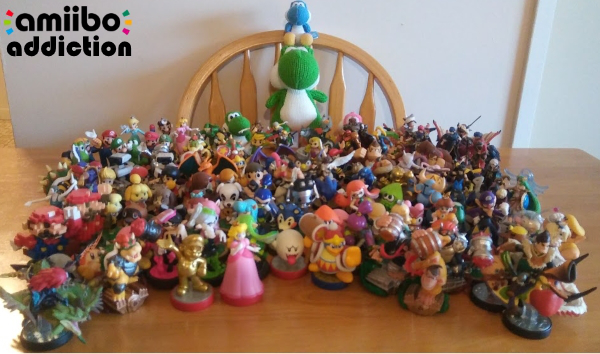 Though not widely recognized within the medical community, Amiibo Addiction is a devastating disorder that affects nearly 1 in 4 Nintendo fans. Obsessive fanatics with a deep-rooted childhood love for Nintendo characters are more susceptible to the disease. Fans with a predisposition toward liking cute things are more at risk of developing the advanced stages of the disease. Symptoms can include but are not limited to:

The patient is a female in her late twenties who refuses to give us any details about her life. She was brought to our specialized treatment center after authorities found her harassing clueless video game retailer employees for information about “the new Super Smash Bros. Amiibo”.  According to personal identification items, the patient’s given name is Ellen, though she demanded we call her “Lightning” during the psychiatric evaluation. Further research revealed that this Lightning she pretends to be is a terribly designed fictional character from the worst Final Fantasy game ever created. The patient immediately turned aggressive when we confronted her with this fact. She proceeded to break her chair over the interview table, punch several staff members in the nose, and kept nonsensically yelling that this was the “worst birthday ever”, before eventually being subdued.  In addition to Amiibo Addiction, the patient is obviously suffering from some sort of delusional fandom disorder, and she clearly has a horrible taste in video games.

The patient was quickly transported to our secured holding facility. After she regained consciousness, she kept rambling that it was her “focus” to collect all of the Amiibo, and she threatened to use her “L’Cie” powers on us if we didn’t let her go complete her mission. It took several days before we could convince her that the moon wasn’t called “Cocoon”, she couldn’t summon something she called “Odin”, and that malevolent “Fal’Cie gods” were not influencing Earth’s human population. We were also able to control her violent outbursts by regulating her coffee intake. The calmer patient relented to the fact that Ellen could never become Lightning, and she became more cooperative with our medical research team. We were finally able to extract more details about the patient’s decent into severe Amiibo Addiction.

Stage 1: Caring About In Game Functionality

On December 25th 2014, the patient received a copy of the video game Hyrule Warriors as a gift. She loved mindlessly slashing through waves of Zelda monsters with iconic characters from the series. At this point she had only heard Amiibo figures existed, but she had no interest in purchasing any. When she learned that the Super Smash Bros. variant Link Amiibo unlocked a powerful weapon called the Spinner in her game, she decided to go buy it. She is also a huge fan of the Zelda video game series, so she thought the figure would also look nice on a shelf.

Two days later, the patient went to a local retailer to purchase the desired Link Amiibo. When she arrived at the electronics area, she was shocked by the sad state of the tiny Amiibo rack. The rack was almost completely empty except for four Amiibo: Link, Zelda, Peach, and Samus. That barren image made something snap in her weak mind. She immediately scooped up all four of them and purchased them without a second of hesitation. She thought the figures looked amazing in the original packaging, but after admiring them for several hours she carefully opened them, preserving the original boxes. She scanned Link into the failed Wii U video game console and enjoyed laying waste to legions of Bokoblins with the crushing Spinner device.

The patient quickly became bored with Link’s Spinner weapon in her game, and she began innocently checking online retailer websites to see what other Amiibo characters were available. An adorable pink Kirby Amiibo caught her attention and she immediately added it to her cart. Since the online retailer had a minimum order amount to get free shipping, the patient went ahead and added a fireball-wielding Mario and striking Donkey Kong Amiibo to her cart. She noticed that many of the other Amiibo characters were out of stock which intrigued her. After completing the online checkout process, she researched the figures more carefully. When she discovered rumors that Nintendo had discontinued certain characters, the disease fully took control of her mind.

The patient read countless angry forum posts about what addicts at the time referred to as the “Holy Trinity” (Marth, Wii Fit Trainer, and Villager) as well as countless rants about abusers desperately seeking the Little Mac and Pit Amiibo. She stumbled upon an article warning that the Diddy Kong Amiibo was becoming rare, and she quickly purchased it when she found it in stock online. Initially, she told herself she would only buy the characters she liked, to avoid being disappointed by not finding them later. The symptoms progressed further in the coming weeks. The patient couldn’t help but import the elusive Villager and Wii Fit Trainer Amiibo when they miraculously appeared on the German version of an reputable online retailer’s website. Shortly after, she impulsively purchased the Little Mac Amiibo from Japan, and the Pit Amiibo for cheap from a clean Kijiji seller who had kicked the habit.

The patient was consumed by euphoria when all of her Amiibo arrived safely at her residence. She refused to take them out of the original packaging, thinking they looked much better in the box, and she truly regretted opening the initial four Amiibo she purchased. In the coming months she went to great lengths in order to buy all of the latest characters as they launched. The patient compulsively checked the Amiibo Reddit website several times a day for latest launch dates. She lined up at retail locations hours before opening, woke up at ungodly hours to mash F5 on her keyboard, and constantly pestered local video game store employees to secure preorders. A disturbing trend emerged where retailers were given exclusivity on some characters, which added to the patient’s instability. She said she’ll never forget the brawl she witnessed over the once Walmart exclusive Jigglypuff Amiibo, one dire launch morning.

The kingpin of the dark Amiibo trade, Nintendo, eventually got its act together and started producing enough of the product to meet the demands of abusers. With stock levels no longer a problem, the patient was able to return to a somewhat normal life, only casually checking online to order Amiibo as they launched. Over the next couple years, she had no choice but to open all of her Amiibo due to space constraints. She felt like a monster for tearing apart the beautiful box art, but the figures looked amazing on the custom shelves her father constructed for her. She imported Amiibo that only launched in Japan in order to maintain what she calls a “100% complete collection”.

Before we detained her, she had accumulated an astounding 123 different Amiibo figures. This is one of the most advanced cases of the disease we have ever come across. Without our intervention, we believe she would be living in a cardboard box with her collection within mere weeks.

Our team of world renowned addiction specialists tried several treatment options, but even the brightest psychiatrists of our time were unable to reach the stubborn patient’s chaotic mind. For the safety of the patient and other innocent humans, we have no choice but to have her detained indefinitely at our long term care facility until a cure is discovered. She is being held in a quiet padded room with the Amiibo collection she has accumulated thus far. She has been isolated from the depressing world, and also cut off from any news feeds that could alert the patient of new Amiibo releases. This was the only way to stop her incessant howling for “moar Amiibo”. After the first few days in confinement, the patient oddly appeared to be extremely happy to be alone. She largely ignored her Amiibo collection, but still proudly looked it over occasionally.

Recently, her delusions of being the Lightning character appear to have resurfaced. Yesterday, a nurse discovered her praying for the “Goddess Etro” to make her the chosen Knight. This morning, the on call doctor had to sedate her after she tried breaking out of her cell. She seemed to think she was “The Savior” of the world, and she was in a panic because she only had 13 days to stop an orange tyrant from destroying Earth as we know it. We suspect these latest delusions relate to the two horrible successor titles to the disastrous Final Fantasy XIII game, but we’re not sure since no other gamer has reduced their standards enough to play through them. We’ve begun studying her erratic delusional fandom disorder, and will possibly be publishing our findings in a different study.

“Lightning” Ellen is an extreme example of how bad the disease can become, but most Amiibo abusers will have enough willpower to seek help before the symptoms become this severe. Prevention is key when the signs of Amiibo Addiction first appear. As long as most abusers can limit themselves to only buying the Amiibo they truly want, we suspect the disease will never reach epidemic proportions. The only way to avoid the disease completely is to NEVER buy any Amiibo, no matter how cute and innocent the figures appear to be. It just takes one NFC figure to set an innocent person on the dark path to Amiibo Addiction.

Disclaimer: The author of this report is not actually an expert in any fields, and this is a parody disorder (obviously). Also, PLEASE DO NOT follow any medical advice from the author of this study, ever.

Okay. I’ll be serious now. TL;DR – I love collecting Amiibo!!! Ahem. Hey! Wouldn’t it be funny if the WHO made Amiibo Addiction Disorder an actual thing? Just like gaming disorder…

What about you, internet? What are your thoughts on Amiibo? Do you obsessively collect anything else gaming related? I promise I won’t use your story for my next case study (unless you sign my release form), so feel free to use the comments section thingy down below!