As some of you may know, I’ve been streaming SOMA over on TheAmbiGamer on Twitch. I was drawn in by a few recommendations, first one being from a few years ago by The Shameful Narcissist, and most recently from Kim from Later Levels. With the promise of a good story and some frighteningly existential questions, I downloaded SOMA, grabbed my teddy bear, and settled in for some philosophy and chill(er).

Full disclosure, I haven’t finished the game as of time of writing, but as of the time this post goes live, I’ll be about halfway through (I hope), so I won’t be getting too much into the philosophy/existential crises the game is said to address, but rather just some first impressions of the game as a whole.

Starting up the game presents with what I imagine is standard first-person horror fare, with the main character being at home, testing gravity and playing with the mechanics.

At least, this is what I have gathered from my time with this game, and my even briefer time with the Prey demo, which has its own walkthrough here, complete with comments in real time from my brain, if you’re so inclined to watch Athena interact with more horror games.

In either case, we, the main character, set out from home, and that’s when things start getting spooky.

Regardless of my general distaste for jump scares, I do love a good psychological horror game, especially if the game highlights a journey undertaken within the mind of the character, a la Hellblade: Senua’s Sacrifice. I think that’s what I was expecting when I opened SOMA: a focus on the existential questions of what it means to be human, and continuity of consciousness, instead of what I considered to be the more standard “you’re alone and you need to figure out these puzzles to open doors and stuff but watch out for the creepy things.”

Pluses and Perils of Safe Mode

I will pause here to admit that I played this game in the safe/story mode. This is for the people who want to experience the tingles of fear during the game, but not be in any real danger from the monsters. They can scare you, they can even attack the character (as I learned accidentally), but the character will always survive the encounter.

On the one hand, this was great. I’m fairly certain that I would not have played the game if it didn’t have this mode, as I actively avoided it prior to the safe mode being added to the game. The scary music and noises, the creepy things popping out, and the array of creepy creatures that you need to alternate between looking at, not looking at, running away from, and quietly tiptoeing away from, all came together to provide a scary enough atmosphere that I was pleasantly creeped out for about the first five hours of gameplay.

First five hours? you ask. Athena, did you suddenly, magically, inexplicably become more tolerant to horror? Will you be playing even more scary games, now??

It was at this point that my core desire for playing games overpowered my elevated blood pressure, and the cold, calculating, no-emotions INJF brain I have squashed my emotions and took in the game logically.

It was at that point that my desire for questions challenging my beliefs as to what is real, what it means to be human, and and a desire to be filled with existential drama began making me irritated at the interfering horror nonsense I was now being forced to go through.

I even decided that I was just going to ignore the monsters in an attempt to just focus on getting to the next part of the game with some story bits, which caused a bit of a startling discovery. 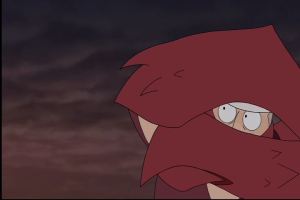 I thought about this aggravation after one particular stream: had I made a mistake with putting it on safe mode at the start? Would I be less annoyed if the monsters could actually hurt me, and I had to be more tactical?

Probably not. I’d probably be more annoyed, actually, if I was so close and then got thrown back to an autosave point and had to slog through some previous set again. At my heart, I play games for story, or interesting characters, and the little breadcrumbs that were left here and there didn’t, in my mind, forgive the horror game I was playing for having the audacity to continue being, well, a horror game.

That’s not the fault of the game, of course. Horror and creepy things popping out at me is just not my cup of tea. I survived Until Dawn because it seemed like there were more clues for the mystery/story, more often, and when you were exploring the story bits, the monsters were mostly at bay so I could take my time wandering around.

Again, that’s not the fault of this game. SOMA is a horror game, and it is just being a horror game. I’d even go so far as to say it’s a good horror game, as most of the game is quite unnerving to play through.

But when the story does dare to peek out from under the covers, it presents some interesting questions.

A Question of Humanity

Once I finish the game, I’ll have another post that addresses the questions that SOMA is slowly getting around to hitting the player with. I’ve already seen a number of questionable notes left on computers and tablets and scattered throughout the different environments.

I’ll be musing on some of the questions that I’ve come across, so beware unmarked spoilers below.

Is Simon, the main character, a copy of himself? Does that make him a copy, or a separate individual?

Does the continuity of consciousness count for a copy outlasting an original?

Who actually convinced all those people to commit suicide, in order to promote one continuity of consciousness?

…Where are all the rest of the bodies?

Are there more copies of Simon, Catherine, and others walking around?

Why were dead bodies needed to create the robot forms like Simon has?

Why is Catherine so cold and suspicious-sounding when it comes to the ARK?

Hopefully, I’ll have some more thoughts and answers soon!

Have you played SOMA? What did you think of it? Did it fill you with existential dread, or was it just another horror game? By the time this post goes live, I’ll have mostly finished it, so don’t worry about spoilers…