We interrupt our Mass Effect Month to talk about another fine BioWare game: Dragon Age: Inquisition.

I should have called this “BioWare Fan Month.”

My friend over at Falcon Game Reviews recently wrote a fantastic review of Dragon Age: Inquisition, and we decided it might be fun for him to write a review, and then for me to pick apart some of the social themes in the game. If you haven’t read his review, please do so. Even this hard-core Dragon Age fan appreciated the fair and critical eye he turned on this third installment in the series.

Speaking of critical issues, one of the central themes in Dragon Age: Inquisition is the mage-templar conflict, which is an issue that has been bubbling beneath the surface for the previous two entries in the series. The conflict seems quite fantastical, but the underlying issues are not only realistic, but eerily reminiscent – at least thematically – of some situations and events that have happened in the physical world.

A (Somewhat) Brief History of the Mage-Templar Conflict

So the history of the mages and templars goes back to before the time of the Chantry, to when the Tevinter Imperium was powerful and ruled Thedas. Tevinter is a land ruled by mages, and – basically – they worshipped the spirits created by the Maker rather than the Maker himself. Eventually, about 400 years before the Chantry began, some very powerful mages decided that they wanted to enter The Golden City (DA’s heaven) and cast out the Maker in the name of the Tevinter gods, claiming power for themselves. 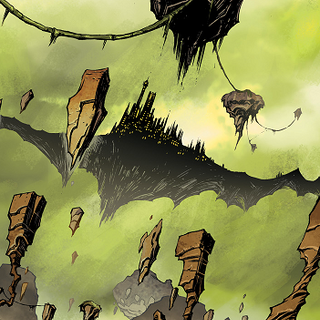 After being cast out of the now-corrupted Golden City, the Maker turned away from his human creations in disgust, locking himself and his perfect City away where neither could be reached by his sinful creations.

Fast forward a bit, and Andraste receives her divine visions from the Maker, wages war against the oppressive Tevinter Imperium, the Chantry is formed, and the Chantry begins to suppress the mages – not only symbols of the oppressive Imperium, but also the “cause” of the Maker’s abandonment. And thus the stage was set.

As Falcon509 states so eloquently:

For the unacquainted, the conflict is one of oppressor versus oppressed. The mages, desiring freedom from templar scrutiny over their lives, have been trying to break free of their oppressors. This often comes at the cost of doing some truly terrible things, like using forbidden magic and summoning demons. On the other hand, the templars have been attempting to tighten their grip around the throats of their charges and quash any rebellion that crops up.

[…]What is interesting about this, is that neither faction is completely right or wrong. Both sides are attempting to accomplish something good, but both sides also use horrific tactics to find that solution. The mages, who did not choose to wield magic, just want their freedom to live out their lives. The templars see mages (sometimes correctly) as a threat to those around them. Not all mages are bad guys, but the same applies to the templars.

But unfortunately, to the mages, templars, and everyone caught in the crossfire, there is no room for negotiating, and all the problems are most definitely “the other guy’s” fault.

Considering the unrest that bubbles beneath the surface in Dragon Age II, not much time is given to the mage-templar conflict in Dragon Age: Origins. Really, this is unsurprising since a Blight was ravishing the land and folks were probably a little occupied with other things. The only hints we have are during either the mage origin story and/or the Circle Tower quest, during which we see a glimpse into the dynamic between mages and templars (aka, they don’t get along). 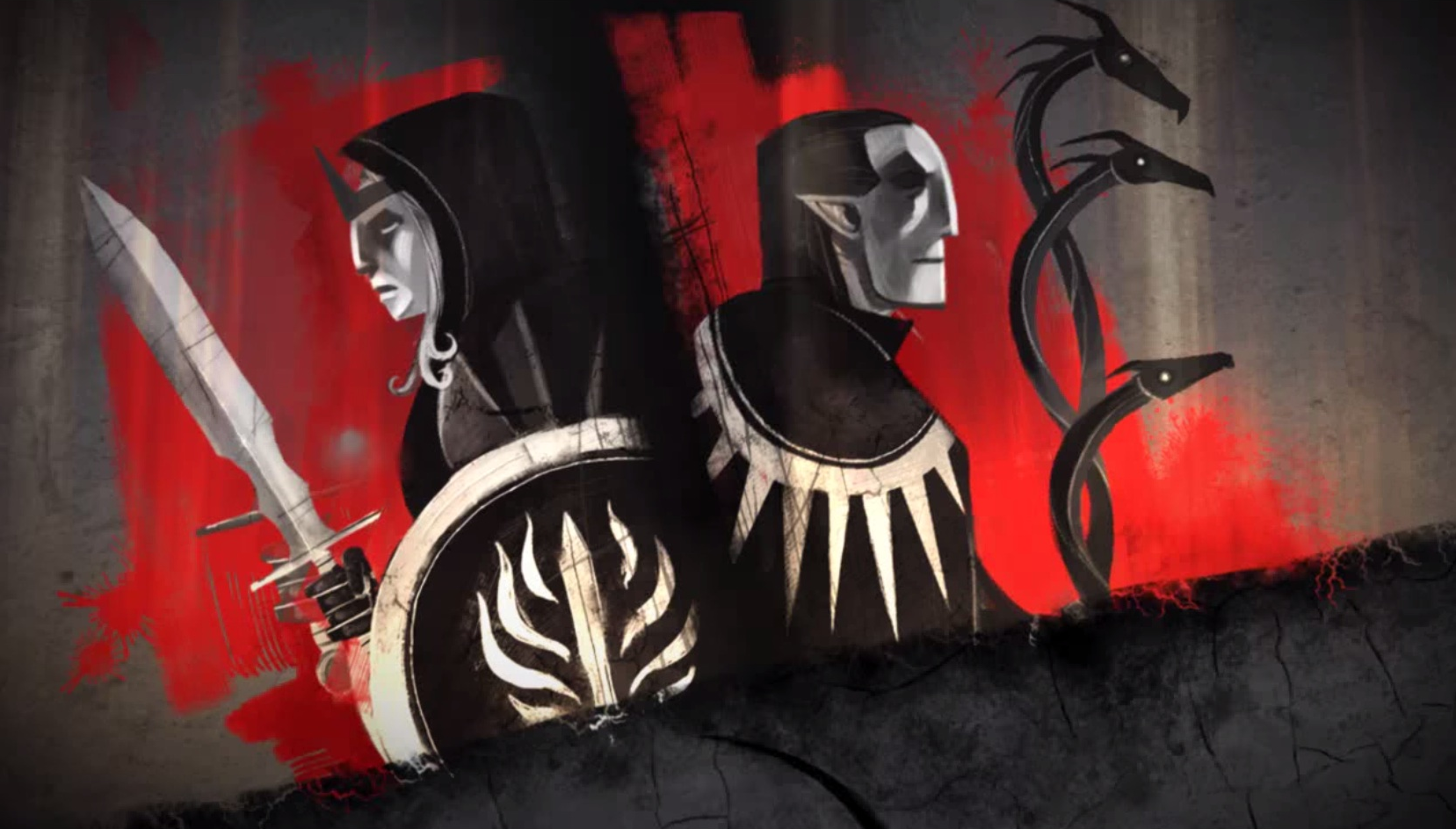 Then, Dragon Age II comes out and attempts to show more details into the unrest between the two groups. The grey areas are explored to a certain extent, and we as players begin to see that neither side might not be completely innocent. However, BioWare’s canon ending is for Hawke to side with the templars, and this is portrayed a bit during the actual game, as we’ve talked about before.

In any case, Dragon Age II hints that it’s not just Kirkwall that is experiencing unrest. In fact, Leliana – now an agent of the Divine – is sent to investigate Kirkwall in order to assess the possibility of a larger mage-templar conflict. When Anders – fed up with the unfair treatment of mages – makes his final, explosive move, tensions finally snap. Mages begin rebelling throughout Thedas, with some simply wanting more freedom, and other openly attacking templar/others.

Which brings us to the year 9:41 Dragon, when the events of Inquisition begin. This poses a fascinating twist to the story and to the concept of role-playing. While this might not be something that pertains to newcomers to the series, veteran players have two games of history behind them when coming face to face with this conflict. 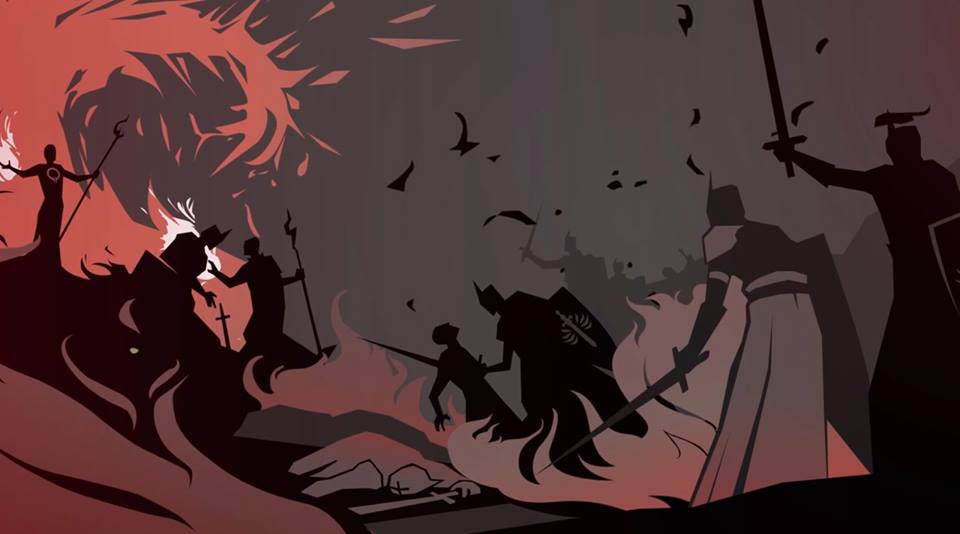 To be blunt, my heart was with the mages in Origins. I didn’t like how they were mistrusted at best and hated at worst. Even though I was not a templar fan, I would up siding with the templar in Dragon Age II for role-playing reasons, even though I – as a player – wanted to side with the mages again. After all, who in the world sides with oppressors? They are the villains, always.

In Inquisition, the player is put in a position where he or she can put his or her inquisitorial foot down and squash whichever group he or she doesn’t like. But the problem is that once the Inquisitor begins talking to the templars, and talking to the mages, it’s clear that neither group is inherently innocent or guilty. They are simply on different sides of the issue. Both have been attackers, and both have been victims.

But that’s a tough conclusion to draw sometimes, because it means having to bypass your own beliefs and biases as a player and sift through the quagmire of anger and (potential) hate speech to get at the heart of the issue. In the end, the Inquisitor can’t broker peace. He or she must pick a side, and must pick a side he or she thinks makes the best case, not the one who makes the perfect case.

Don’t worry, though. It’s only the fate of the world that’s at stake.

There are a couple factors that led to this conflict. The most obvious one is that for too long, one group of people was repressed, feared, and often hated simply for being different. When they fought back, their efforts were squashed, and instead of hearing their cries as ones for help, their words and actions were taken to reinforce the misconceived notions about them. And so when more radical actions were taken, they were further – and more openly – oppressed, in order to maintain the status quo. So some, in the case of Anders, blew up “the system” in order to finally be heard. 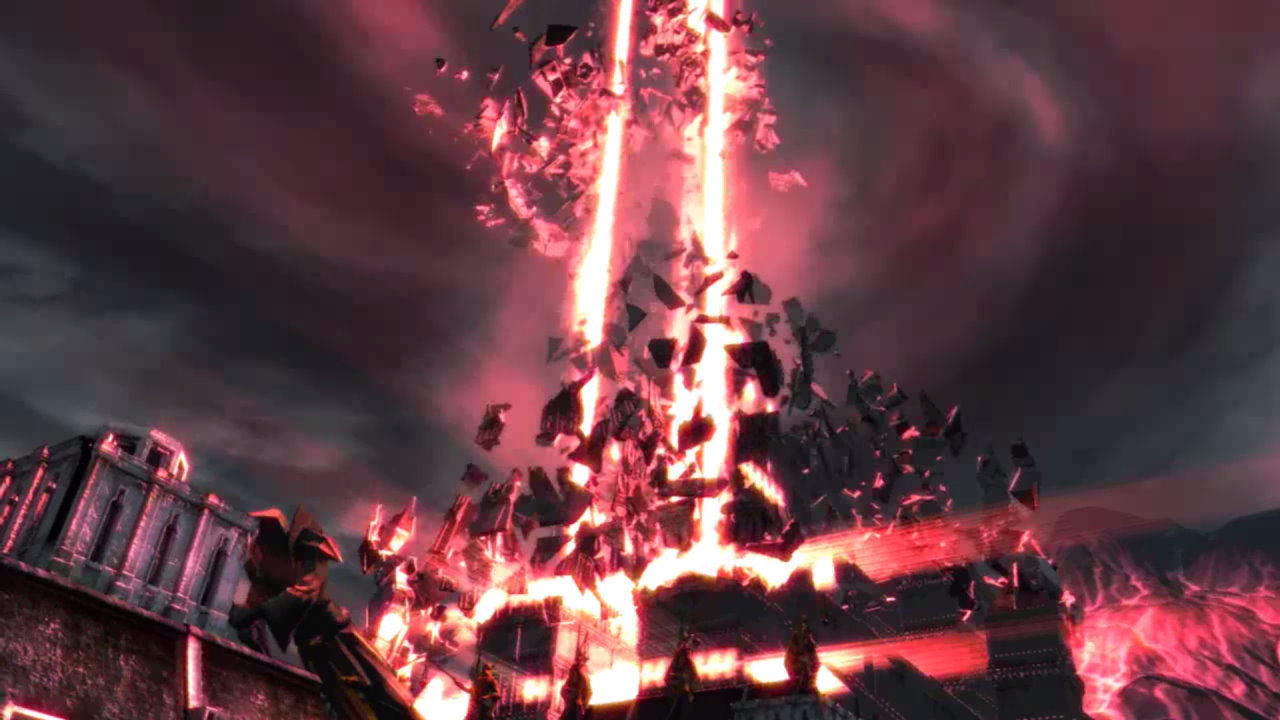 Another factor is with the templar, originally charged with keeping the word safe from the mages, but also keeping the mages safe from themselves (in the form of demon possession). A noble cause! But somewhere along the way, they became isolated from the plights of the people they were supposed to take care of, and became so enamored with their cause and righteousness that they inadvertently became villains in their own stories.

Neither of these groups, as I’ve mentioned, are patently right or wrong. They are just seeing the issue from two different sides. The problems occurred when they – quite humanly – stopped listening to the other side when they saw people in their group getting hurt.

We Are Now the Inquisition

As I wrote the above sections, I realized that I could have actually been speaking of real-world events. For those of you who may not know, the United States just went through a rather dramatic election season. While there are many societal reasons the results of the election wound up as they are, I’m not going to comment on that. For once, I’m going to keep my focus solely on the individual.

This last election season, each citizen was the Inquisitor: thrown into a less-than-ideal situation and given novel information that they had to contend with. Many people’s lives were suddenly being noticed, and many people’s lives were suddenly being disregarded. Some minorities were elevated, some were reviled, some majorities were – for the first time – ignored, and other previously-ignored majorities found their voices heard.

Within this nuanced and confusing mess, we were given two people from which we had to pick one. Members in both camps yelled spat hate at the other group, promoted fantastical, exaggerated or – worse – fabricated “news” as facts, and added more noise. The fate of each of our personal worlds felt at stake. 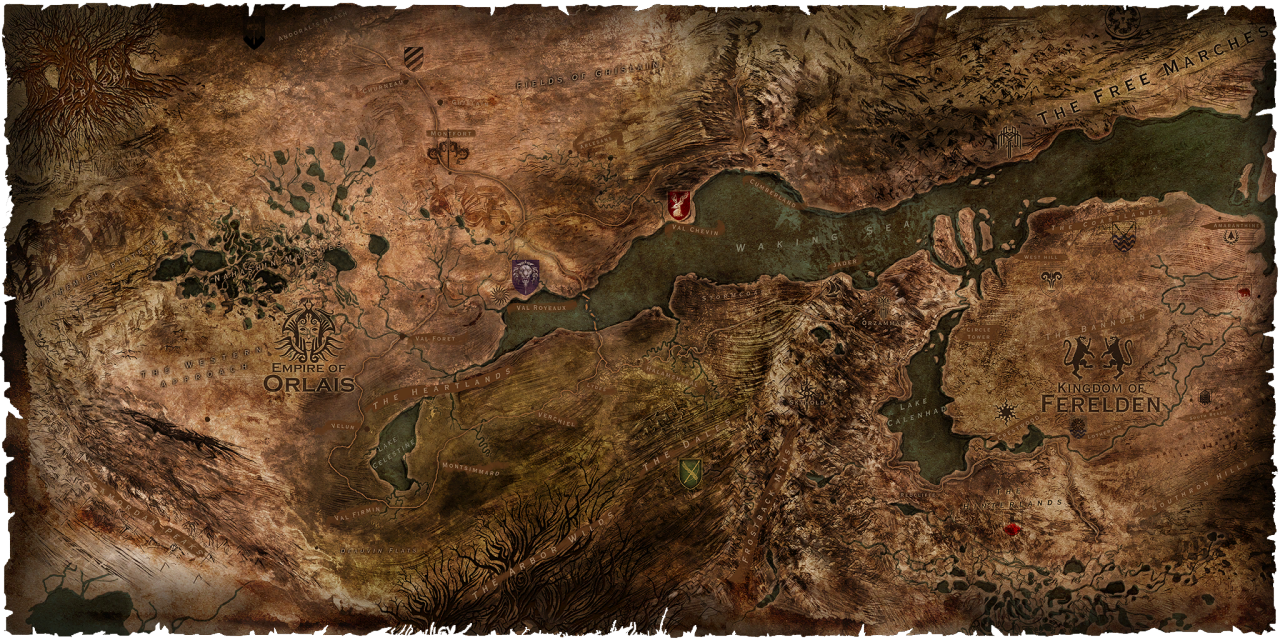 Each of us, like the Inquisitor, needed to sift through the chaos to find truth, or clarity, or something firm to build our case on.

And each one of us had to make a choice about which side we were on.

End Credits
Like in Inquisition – and perhaps even in Dragon Age II – the “sane” voices tended to be drowned out by the loudest speakers on the opposing sides. Extremism, and not rationality, ruled, and what resulted is two groups that are still screaming at each other while moderates are still largely ignored or, worse, forced to declare themselves on one side or another.

It was, and is, a less-than-ideal situation, and we were all forced to make a difficult decision in the midst of confusion and conflicting information.

But now, the monkey wrench. At the end of Dragon Age: Inquisition, we discover that a new Divine has been chosen. The decision of who will take the Sunburst Throne in the Chantry is indirectly decided by the Inquisitor’s actions, but no formula is given in-game, and the Inquisitor does not really have a say in who rises to power.

Full disclosure, my first choice for Divine was Cassandra, followed by Leliana. My game, however, concluded that Vivienne would be the next Divine.

So, in the midst of the chaotic world, filled with war, hatred, deceit, and uncertainty, the Inquisitor needed to be careful, because her actions had consequences. The consequence may have been unintended, but it was unknowingly fueled by the Inquisitor’s words and actions. 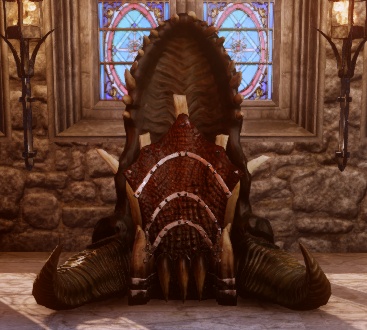 So it turns out your actions, your words, and your choices do matter. They affect the world, so be sure that when you make a choice, sitting in your Inquisitorial throne, that you’ll be okay with each and every consequence that choice might mean.

What do you think? Is the mage-templar conflict complete fantasy, or does it hit too close to home? Have you ever experienced something in a video game that made you question how you behaved in real life? Let me know in the comments!