Today we’re reaching back in our gaming memory…

Day 24: What is your favorite retro game?

My favorite retro game? It depends how retro we’re getting, and on what platform we’re talking about. Everyone loves a good round of Oregon Trail, and I was all about its sequel, Amazon Trail, which had you scouting the Amazon River (and yes, it was amazing).

I’m also a fan of Kirby’s Adventure on the NES, because it was the first game that was “mine” that wasn’t the terrifying Sesame Street ABC – 123 (two games in one!). I don’t know what was so horrifying about that game… but I was so happy when I got Kirby’s Adventure. I remember asking my parents if I “had” to play the Sesame Street game, and they unanimously said “no” after seeing me play it a few times.

In case you want to know the horror that 4-year-old me saw:

Anyway, I was talking about Kirby. He’s a contender for the top spot. I remember feeling so proud of myself when I beat Nightmare all by myself.

Kirby was another attempt at a “children’s game” that Santa brought me. I remember we were all sitting in the living room playing it (my siblings, my parents, and I), and we played through to the end. Now, for those of you who don’t know, Nightmare on the NES looked like Dracula with static for a body. 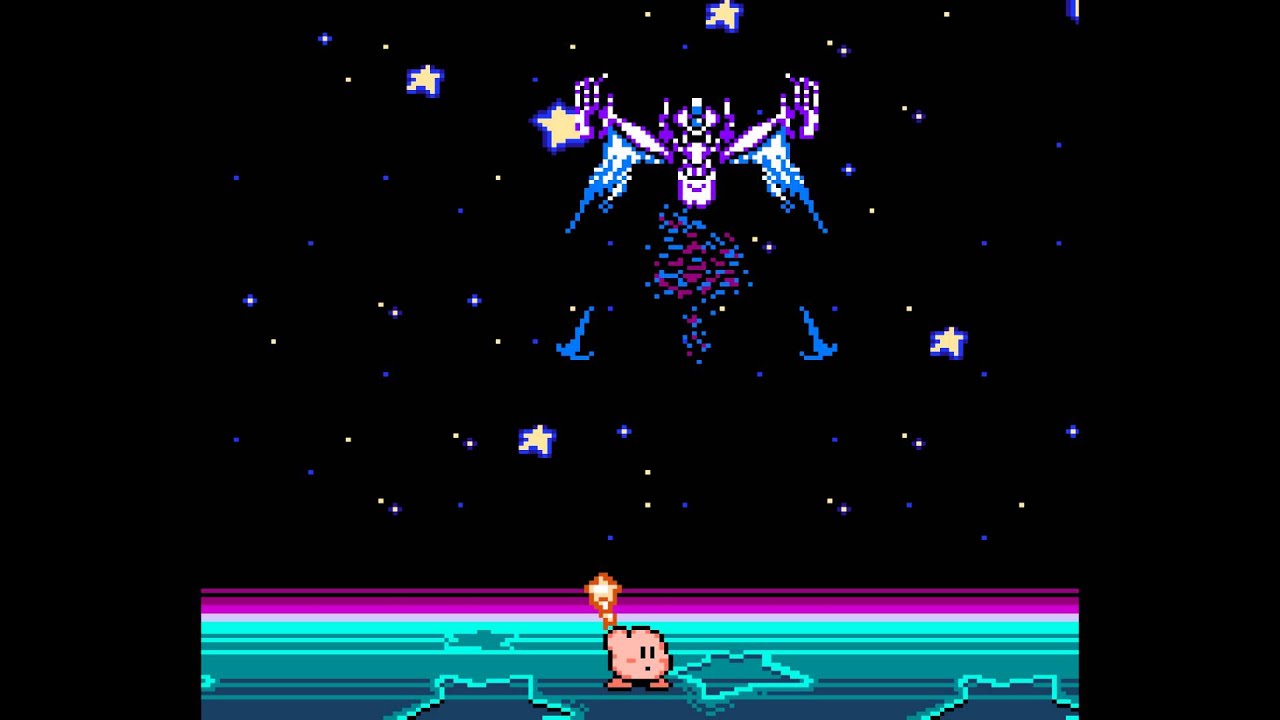 It looks silly now, but I was very little when I got this game. I remember my brother was playing when we got to the last level, and he was fighting Nightmare. My sister turned to my mom and said, “This is a game for children?”

My mom (watching my brother play): That’s what they said, but…

My sister: This guy’s horrifying.

Needless to say after that conversation, when I faced Nightmare alone a week later, my little five-year-old self felt very tough.

I also really liked Mega Man II, mostly because of the music, which is a terrible thing to say because it’s a great game and I sank so many hours into it. Of course Zelda II: The Adventure of Link and Winter Games are up there, and my brother and sister and I would all sit around and play “pass the controller” with those. Superspike V’ball is another one with fond memories (mostly because my brother would play it with me a lot). I think I was one of about two people who really liked Mario Paint on the SNES, and of course the Nintendo 64 had a fantastic line-up that I could talk about for a long time, with games like Star Fox 64 eating up a lot of my time, along with Ocarina of Time, Majora’s Mask, Star Wars Episode I Podracer (which I was amazing at, let me tell you), and so many others.

But honestly, the one that started me on games holds a special place in my heart.

My brother used to show me the way to to make the fighters do “the cool things” (their special moves), and even though he was older and far and away better at games than I was, he would at least make it seem like I had a shot at beating him (and I did once. He was very upset.).

I played as Blanka, in case you were wondering.

This paved the way for another cabinet game… One my mother forbid me from playing, but if my brother and I were set loose in the arcade when we were on vacation and she wasn’t right there, well…

I remember getting my butt handed to me many times on this one. Poor Raiden, Johnny Cage, and Liu Kang.

I remember watching my brother play against the computer one time. He was playing as Raiden, against Liu Kang (I think), and my mother, having found out we were secretly playing Mortal Kombat, told my brother that he needed to make sure that I didn’t see any of the “fatalities.”

Yeah. That was a major fail. He remembered to tell me to hide my eyes just as Liu Kang was being thrown into some spikes and exploding into 500 femurs and sets of ribs as pixelated blood splurted around like a firework. (It obviously made an impression on me.) Anyway…

So there you have it. Reading through this again, I think it’s interesting that my favorite retro gaming memories revolve around playing with other people.

What about you? Do you have a favorite retro-gaming memory? Did you use to play with other people, or mostly by yourself? If you have one, what’s your favorite retro game? Let me know in the comments!

Until next time, thanks for stopping by, and I’ll see you soon!
~ Athena