That was unexpected, wasn’t it? 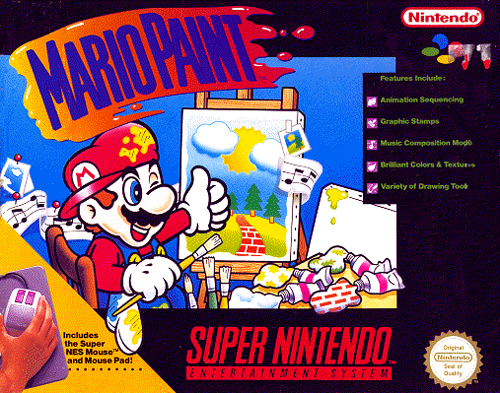 I seriously loved this game so much growing up. There is literally nothing I don’t like about it. I always thought it was so cool that not only were you using a computer mouse on a video game console (which made me wonder if I could ever plug a video game controller into a computer, an idea I now realize I should have patented back then), but the whole idea of not only being able to create your own art, stamps, and simple animation loops, but also be able to create and play your own musical creations using sound effects instead of notes, was just amazing.

I realize now that I used that game like an ear-training exercise, since each line of music was a different sound effect, and would try to listen to each line separately until I could pick out each line individually and at will when the music played. Because I’m a big ol’ music nerd forever and always.

Ahem. We actually didn’t have many games for our SNES, but this was definitely one of my favorites. I unfortunately don’t have it anymore, since when I got my Playstation my house was purged of the SNES and N64 (but not the NES. Don’t even get me started on that day), but I still toy with the idea of finding myself another SNES and trying to pick up a copy of this game, because I spent so many hours with it, listening to and creating songs, playing with the various picture and animation tools, and… slapping flies, because that was a mini-game it included for… logical reasons, I’m sure.