A strange thing happened the other day. I was relaxing in the medieval-style castle I live in, when all of a sudden a giant Koopa barged through the doors demanding to speak to someone named Peach. He looked very embarrassed when I told him that the woman he was looking for was probably in another castle. I offered to make him some tea before he left, and he sat down on the couch and began to talk.

Background: The quintessential villain of the Mario games, Bowser can be a ferocious enemy, intent on kidnapping a woman he is slightly obsessed with, enslaving the Mushroom kingdom, and… taking care of his children.

Explanation: One particularly striking feature about Bowser is that he doesn’t really purposefully hurt anyone, particularly in some of the older games. He kidnaps Peach and leaves his underlings to rule over his “conquered” worlds, he destroys property, and he throws temper tantrums when Mario tries to thwart his attempts at domination, but it seems like his emotions have run away with him. His emotions seem to explode out of him, resulting in harm and destruction, which are the key elements of IED.

After all, he has certainly demonstrated several discrete episodes of anger that result in destruction of property or aggressive attacks on other people, and often these episodes are objectively out of proportion to what is happening in the moment. A man coming to rescue a hostage does not give you permission to try and throw them into lava.

But here is the duality of Bowser. When left alone, he simply goes home with the princess. He even lies to Bowser, Jr., about Peach being his mom, becoming teary-eyed as he explains to his son that he doesn’t “have” a mother. 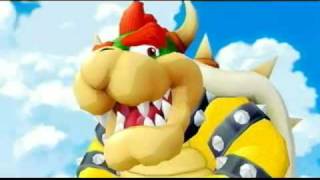 Shigeru Miyamoto has said that the Koopalings are not Bowsers children, either, and that Bowser, Jr., is his only child. This is in spite of the fact that the Koopalings refer to Bowser as “Dad” and Bowser trusts them enough to help him conquer the kingdom and rule over parts of it. Is it possible Bowser adopted them? If that’s the case, why would a creature who, according to his Wiki page, is “pure evil” adopt children and care for them?

Well… one point to consider is that Baby Bowser in Super Mario Bros. 3 (I think that’s the one. It’s been a while), living in his castle, seems to be protected by Kamek and the full-grown, time-travelling Bowser, not a King Koopa dad or mom. What type of parent would let a little baby try and rule a kingdom, with only the help of an old wizard who, frankly, seems like he couldn’t care less?

Yet he does some terrible things, has anger issues, and displays some very maladaptive behaviors when it comes to coping and functioning. He appears to have no regard for the mushroom kingdom, Peach, Mario, or anything, except for his children. He is willing to imprison subjects as blocks and subjugate a conquered kingdom to his will and power, all so he can acquire the one thing he wants. But why does he want to capture Peach? If he wants to conquer the Mushroom Kingdom, wouldn’t it be easier to, I don’t know, just kill her?

Yes, I’m saying poor Bowser doesn’t have any parents, was raised by a somewhat-distant foster parent (Kavek), and has a lot of anger toward the world. However, he tries to rise above his upbringing by being the parent to his children (and even himself, when needed) that he always wanted but never had. And by trying to get Peach to stay, he’d be able to provide his son with a mother, too.

Of course, this doesn’t excuse his behaviors, because the road to hell is paved with good intentions, and Bowser does demonstrate some very explosive and harmful behaviors.

Just the (Real) Facts: As always, having a mental health diagnosis implies that the presented behaviors interfere with a person’s ability to perform activities of daily living (hold down a job, maintain relationships, etc.). Everyone has times when they get angry and say or do things they regret, and that have lasting consequences (perhaps if you get into a nasty fight and lose a friend or break up with someone), but to have IED, there must be several episodes, to the point where it consistently affects your ability to work or maintain relationships.

Now on to foster care. While not causative, research has shown that there is a very strong correlation between time spent in foster care and maladaptive behaviors and adaptive functioning deficits, and it’s been estimated that up to 80% of foster children display some sort of “acting out” behaviors in schools. But this can be mediated by the type of home the foster child is a part of.

If the foster parents are accessible, supportive, and loving, however, children tend to have fewer problems, and the younger the child is when he or she is put into a family like this, the more likely they will be to develop healthy attachment skills, which trickles down into other social behaviors later. It’s possible that Bowser did not have this sort of attachment growing up, is resentful toward his situation, and so become one of the children who falls into the percentage of little ones who don’t fare well in the system.

But, in his own way, he’s trying to provide for his children what he wanted as a little koopaling.

Have I made you feel bad for all the times you dumped Bowser into lava? Do you think he’s a victim of the system, or just mean through and through? I still have the list from last time, but do you have more villain suggestions for me? Let me know in the comments!