Mass Effect Month, Day 14: What is your favorite loyalty mission?

I was originally going to say Tali’s from Mass Effect 2, simply because I loved the idea of having a trial and having to outwit, rather than outgun, the people who are opposing you. Of course, the story arc for Tali is also fantastic, especially how she sees that even her own father dabbled in some questionable things… 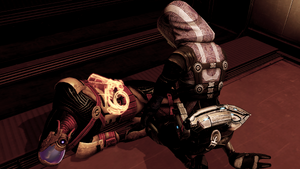 …but all to protect his little girl. But I talk about Tali all the time, so let’s set our sights on another fantastic loyalty mission. Again, it’s from Mass Effect 2, and centers around the Normandy‘s psychotic biotic, Jack.

Poor Jack was used an abused her whole life in an attempt to make her a heartless super-biotic, and as a result she “goes rogue,” becoming a criminal and fairly unstable for a lot of the game. However, the two little details that I loved so much about her mission was when the crew reached her room and all she wanted to do was reminisce a bit, as if telling her story would somehow ease the burden she carried with her.

And then, when they were in the transport, ready to blow the lab to smithereens, she hesitates.

You see her waver back and forth over letting her past go, which is something I think all of us can relate to, if it’s not something we struggle with ourselves from time to time. And Shepard doesn’t push her, doesn’t force her. It has to be Jack’s choice to move on, and she takes it.

She takes her life back.

What about you? What’s your favorite loyalty mission? Let me know in the comments!