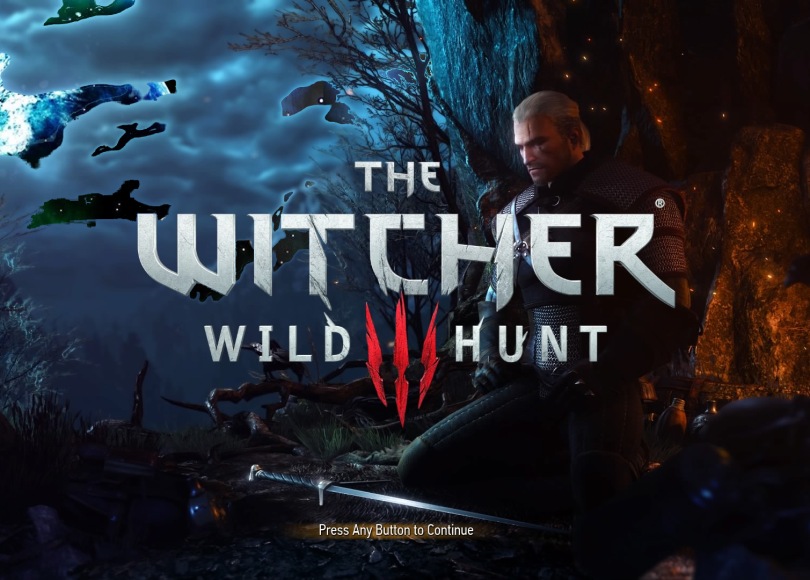 This article is part of our Year of the RPG. You can read more about our Witcher 3 adventures here.

Another first impressions post? Yes, well, all will be described below, but over 60 hours in and I am waving my little white flag with The Witcher 3. Not forever, so you might see this game be revisited during Year of the RPG: The Two Years… At any rate, here we go.

Released in 2015, The Witcher 3: Wild Hunt is an action-RPG developed by CD Projekt Red. As its name implies Witcher 3 is the third in a series of Witcher games, and is the sequel to the aptly-named The Witcher 2: Assassin’s of Kings released in 2011. But the Witcher has a longer history than even the 2007’s original The Witcher. The main character, supporting characters, and events in the games are based loosely on the novel series of the same name by Polish author Andrzej Sapkowski, in which our protagonist, Geralt of Rivia, is a specialized monster-hunter with a surprisingly realistic personal life. 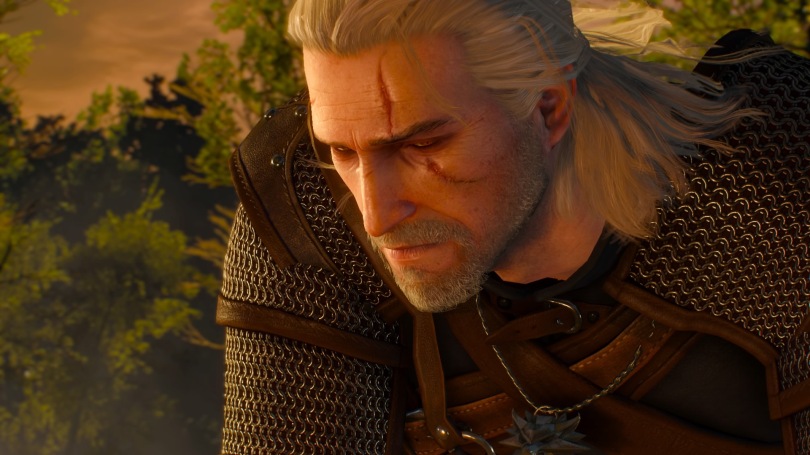 Enter the games, and so far, so good. This is not a comparison of the games to the books (especially since I have not read them), so without further ado, let’s get to the game versions of Geralt’s adventures.

The Witcher 3: Wild Hunt takes places after the events of the first two games, for which I am at a disadvantage as I’ve never played them. I’m sure the game attempted to explain what happened to me in bits and pieces, but like most RPGs, I found myself overwhelmed by information and, without prior familiarity with the series, could only grasp at straws as I tried to master the combat and leveling system.

The plot itself is fairly straightforward, even if the path to its conclusion isn’t. Geralt’s adopted daughter, Ciri, is missing, and after a somewhat prophetic dream, Geralt tries to find and rescue her. Along the way he runs into some old (for him)/new (for me) friends and lovers, and then we are on familiar ground in the land of RPGs, balancing personal and professional lives while trying to make progress on the main story without getting too bogged down in sidequests that relate to the main story in an adjacent (at best) or tertiary (at worst) way.

As a sidenote, I also liked that there was a color-blind option in the menu. Well done with inclusivity, CD Projekt Red! 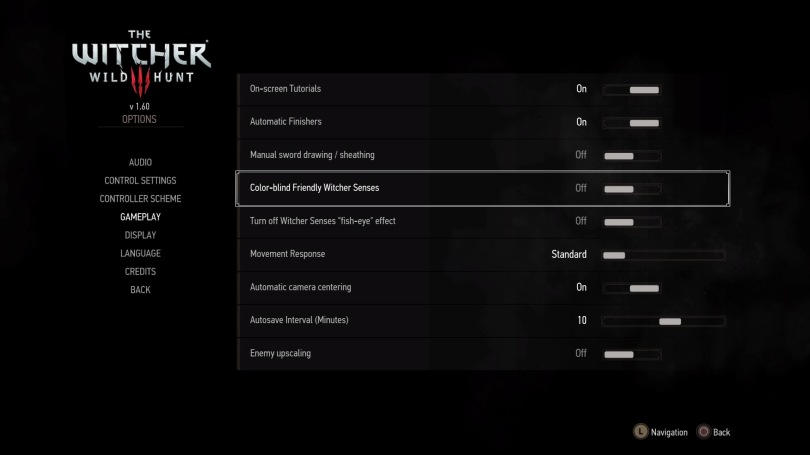 Overall, I find the story compelling, even if at its core it’s “rescue the princess.” The variation the rich world of the Continent provides to this familiar tale is enough to keep anyone interested and invested for hours, with some fans boasting over hundreds of hours of play duration. After all, in how many “rescue the princess” tales do you get to then play as said princess, and completely steamroller your enemies with relative ease, making the princess seem much more adept than the man trying to save her? 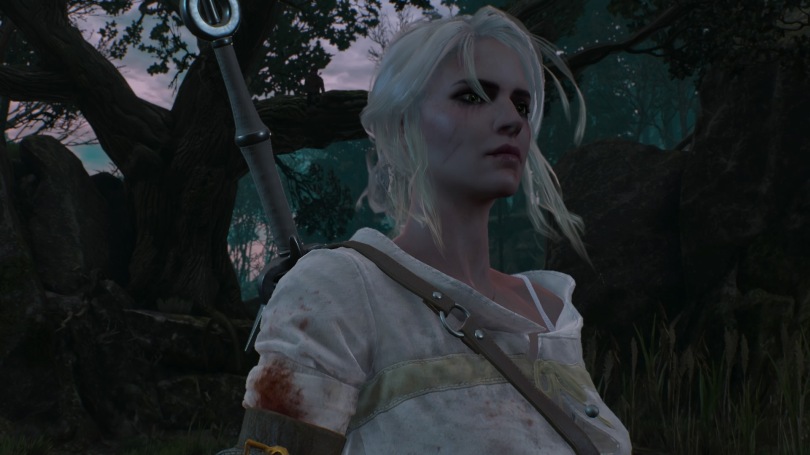 Throw in an old witch who performed a spell to make herself look young forever just because she can, a fiery redhead with a good heart (yes, I realize I have a problem), and an all-around memorable and colorful cast, and the player can’t help but be drawn into the beautiful and rich world of The Witcher.

My first impression was that I ran face-first into a learning curve. The camera never seemed to behave itself, I fumbled through using the different swords that equipped automatically a moment before I hit the button that would send them back to their sheathes, and boy, it took me a good hour before I noticed the level suggestions for each quest.

Once I got my feet under me, as it were, I found the controls to be responsive and the movements fluid, which was very nice after being spoiled by the likes of Shadow of Mordor. I was intrigued by the fact that this is an RPG, because like some of the more modern RPGs I’ve been playing, The Witcher 3 has you roleplay as a particular character, and therefore the player builds stats more than a character. 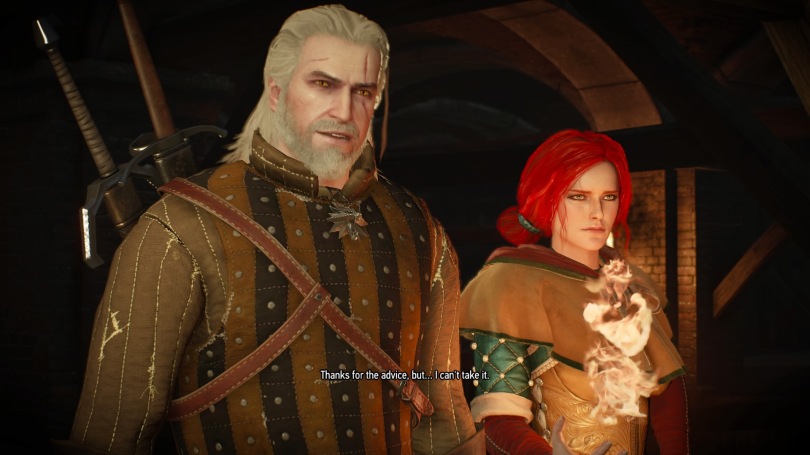 But like any good RPG, The Witcher 3 has plenty of opportunities to shape the world around you, and sometimes in very important ways. We’re talking influencing geo-political landscapes, here. And there is no right or wrong, but rather nebulous decisions that affect outcomes of storylines, be they main or side-quests.

I enjoyed this nuanced choice system, since it did help the player shape Geralt into the type of Witcher they wanted him to be (even if it boiled down to “nice guy” or “stone cold”), and the player could switch between one tone or another without impacting experience points. I always appreciate this in a game because it lets players experience the grey areas that people often exist in, and also react to the things going on around them (e.g., “I’ve said yes to so much before this. Enough already.” and etc.). I also enjoyed when there was a countdown timer, because you had to decide quickly and, you know, Geralt wouldn’t look like he suddenly went comatose after being asked a question. 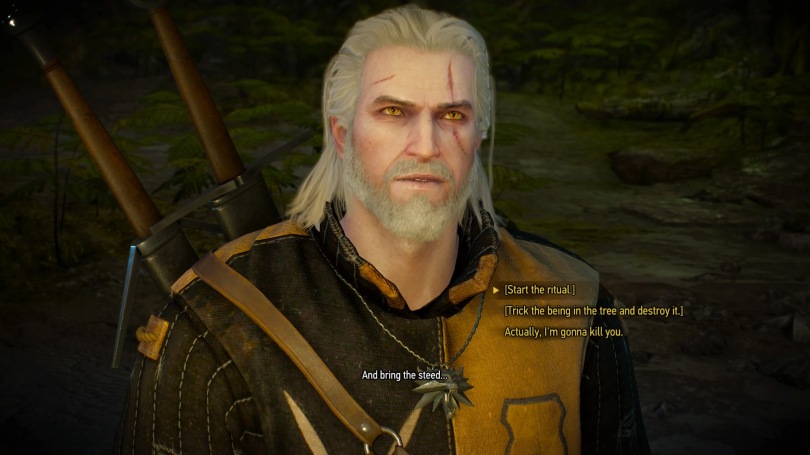 Along with plot choices were all the choices involved in the romance side-quests. Yennifer, Geralt’s old flame, and Triss, Geralt’s old friend, are so different from each other yet love Geralt in their own ways, and it is up to you, The Player, to navigate Geralt’s love triangle. Normally, I couldn’t abide such a situation, but the way the game handles the situation is not ham-handed, and really makes it seem like there is a complex web of history that ties everyone together in somewhat confusing ways, which was fun and interesting to see.

I also really enjoyed that the game occasionally switched between playing as Geralt and Ciri. Honestly I enjoyed playing as Ciri a bit more, because she seemed like such a badass (ahem) and I really wanted to know more about her story. I suppose if I got further into the game, I’d have gotten my wish, but… 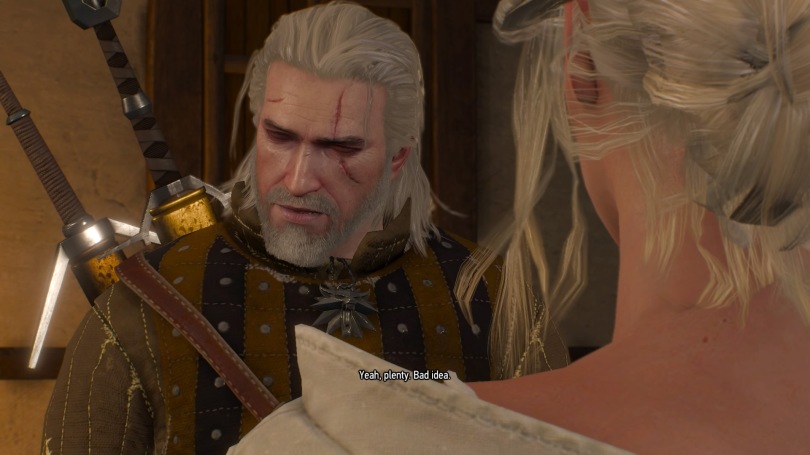 Geralt’s story has a lot going for it, for sure, but it wasn’t all rain and griffins during this experience. After all, there was a reason that this is, after so much time, a “first impressions” post.

Tripping Over a Small Step

I’ve mentioned before that timing is everything, and it’s possible that this was a case of bad timing. However, The Witcher 3 suffers from having an incredibly slow start… Around 10 hours in, I was not particularly invested in the story or any of the characters other than Ciri who had barely made any appearances, and I didn’t particularly like Geralt. If it weren’t for all the rave reviews and the fact that it was a Year of the RPG game, I might have quit playing it.

Having said that, I did find the story to be engaging and interesting after a while, and once that occurred I wanted to see the story to the end. But unfortunately, that brings me to another point that I found very irritating. 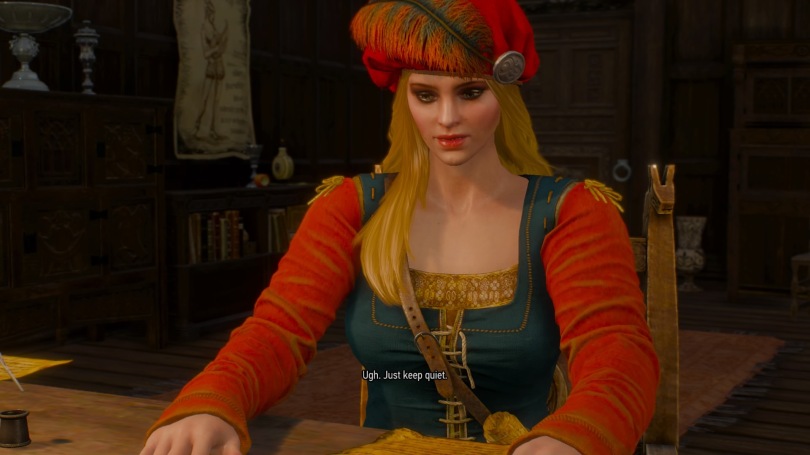 When I played Skyrim, one of the things I liked was that it was designed for a person to build a life as they saw fit. For me, that meant following the civil war and becoming the leader of a guild, and that was fine; my Ra’zirr was able to make his life how he wanted it, and if it weren’t for Year of the RPG I probably would have kept exploring, since the game really did feel like “building a life,” rather than telling a solid story.

With The Witcher 3, there was a definite story arc that the player was to experience, except the game seemed to get confused every once in a while and think that it was Skyrim with a solid story. I decided that I wanted to mostly play the main quests, and only pick up side quests as they interested me. Unfortunately, the game had other plans. 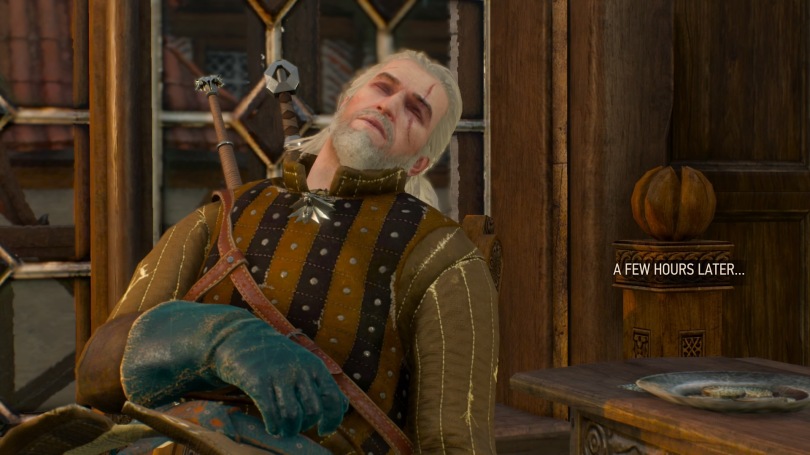 By the time I was done with the sidequest, I had forgotten what the main story quest was.

But I put my time in, and trudged along. What caused the final shut-off,  though, was when it seemed like we were finally getting to the end game, and I was sent on a side-quest, only to be sent on a secondary quest for a character I had already secondary-quested for.

Screw that. Sorry, Geralt, you’re on your own.

I looked online, and it appears that the culture that has sprung up around The Witcher 3 is one of a smug “Oh, you have to play the game for at least 150 hours before it really opens up…” “150? You noob, I’ve dumped at least 270 hours in and I haven’t reached the final act yet.”

If there is one thing I can’t stand surrounding a game, it is pretentiousness. But that’s not what this review is about.

The (Not So Final) Showdown

All in all, I progressed to the end of the second act, when the characters began preparing to defend Kaer Mohren. When I was sent to collect on all the debts of people I had helped, I was met with more sidequests-in-sidequests. By this point, I was over 85 hours ito the game, and just wanted the plot. Like Lucid Path before it, I was tired of the pacing long before the game ended. Unlike Lucid Path, there seemed to be no end in sight. 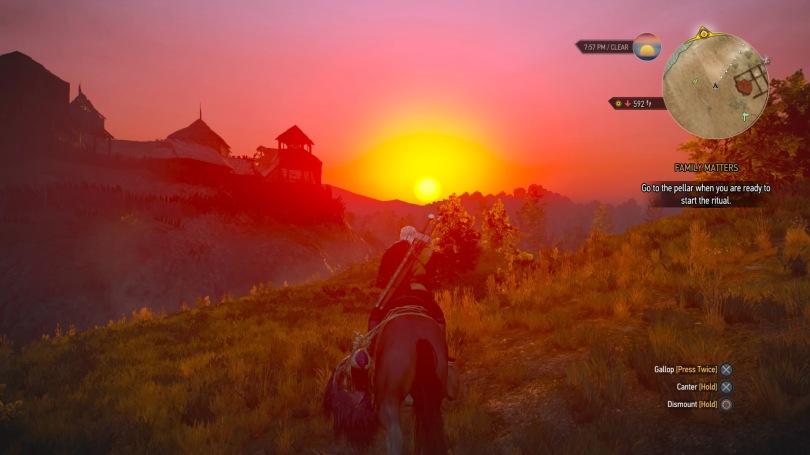 It’s possible, as I mentioned, that I just played this at a bad time, and was perhaps not wanting a “forever” game. This is one that I will be revisiting, because I do want to see the end eventually, but the game did seem to want to force the player to see every single part of their clever game, and so designed the quests with the time-sinks in mind so the player would do just that.

The Witcher 3 has a lot of great points, and is overall a good game with nice mechanics. It had a bit of a slow start, and tended to drag in the middle, but the story is overall interesting. The characters are great, as well, even the one-and-done NPCs that Geralt comes across throughout his adventure.

Honestly, I think this game might be best suited as a “slow burn” game: one that you play in the backgroud while you make progress on other games. It’s definitely not one for people looking for a tight story, but has enough going for it to appeal to Witcher fans, or to folks who enjoy action games with RPG elements.

Have you played The Witcher 3? What did you think about it? Did the sidequests drag on and on, or am I missing the point? Did you think there should be more Ciri, all the time? Let me know in the comments!