Mass Effect Month, Day 5: Who is your favorite character?

So many great options! Okay, no. I got this. There are a lot of great Mass Effect NPCs, and a lot of reasons to love them.

Not surprisingly, my favorite character is…

I’m not sure if it’s possible to dislike Tali. She’s incredibly intelligent, kind, and funny. She’s sweet and disarming, but can hold her own in a fight (for the most part). Another great thing about her is that you really never see her face, so if Shepard/you fall in love with her, it really has nothing to do with how she looks, does it? And, perhaps even more importantly, just because of how she was written, Tali starts off as a friend, and then it grows to something more than that. She’s never thrown herself at Shepard like some others might (cough Liara cough).

Like Garrus, Tali’s personality and relationship to Shepard are based solely on her interactions with him/her. So, for me, it’s no surprise how many Talimancers and Garrusmancers are out there, even with Kaiden and Ashley and the zillion other people you could have a relationship with, and even with Tali only having glowing white eyes visible and Garrus looking like a cross between a cat and a bug. They show us that it’s what’s inside that counts.

Another reason I like Tali is, honestly, because of the state of the quarians. I always thought that the quarians were hated not just because of the whole geth thing, but because they were smarter than the other species in the galaxy (as per they created AI before anyone else) and therefore feared or hated. But Tali never held any of that against anyone. She knew it was there, it bothered her, but instead of becoming a quari-nazi she spoke out when she had to, but otherwise simply set an example through her actions.

In-game (as FemShep), she was like a sister, and she and Shepard went on most missions together. I’m actually glad she wasn’t a romance option for FemShep for just that reason, too. While I think my Shepard might have gone for her, this gave her an opportunity to have a really close friend and not have to worry about all that romance and attraction awkwardness, and that’s important, too.

And most importantly, during Mass Effect 2, she doesn’t agree that Shepard is working for Cerberus, comments on it, but still manages to support her friend. While I respect Ashley/Kaiden for calling Shepard out and walking away, Tali knows enough to see that Shepard isn’t in a great situation, and decides to join him/her because they’re friends.

There’s something very reassuring about that.

As if you needed more, right?

Oh, also, she says this: 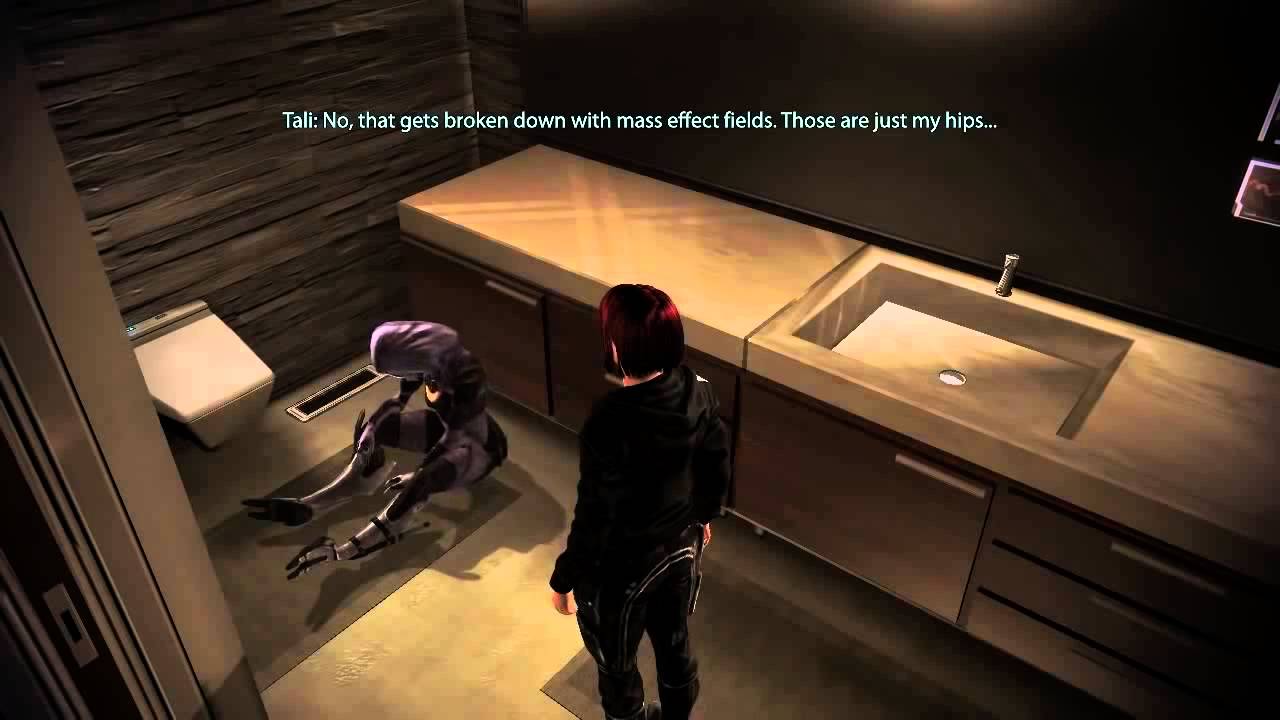 Oh, Tali. It’s okay. Your suit will filter the alcohol out soon.

I even have a little statuette of her that my friend gave to me, and I never get statuettes of characters from games. So that is how deeply I love Tali.

What about you? Who is your favorite character from the Mass Effect series? What do you like best about them? Let me know in the comments!