What are seven of your pet peeves about games?

I remember learning what a pet peeve was way back in third grade. Why the school thought a bunch of eight-year-olds needed to learn about “pet peeves” in school, I can’t remember, but it really is such a great term, isn’t it? “Pet” is usually meant as something close to you, a term of endearment, or, in the case of animals, something you happily care for. A pet peeve is equally close: something you care about so very much because you dislike it so very much.

It’s fitting to use that term here, then, to talk about a few things I really dislike about a hobby that I really enjoy overall. Anyway, here we go: five of my pet peeves about games.

7. Adding map area because all the cool kids are doing it

This was something I was concerned about when I started my Year of the RPG project. Would I become so jaded by open-world games and large maps that I would grow to hate them? Well, the short answer is no, but it’s given me a chance to see how different games use their maps. Some games, like Skyrim, present the player with a living, breathing world to play in, and the huge map is, well, huge, but not irritating to travel across. Also, fast-travel (for those times when you just didn’t want to walk across the entirety of Skyrim) were easy to use.

Then there are games like The Witcher 3, which has a huge, beautiful map that you are forced to traverse, because you can only fast travel from other fast travel points. This means that if you are in the middle of the country (like Geralt often is), you are going to run yourself to the next destination or to the closest fast-travel spot, which takes a few minutes, in my experience. This begins to flirt dangerously with the line of “too big,” in my opinion, because while I don’t mind traversing the country, I want an easy option to zip around when I just want to slam out a few quests.

Then there are the open world games that just did it for all the wrong reasons, and I suspect one of the reasons was “Skyrim is popular so let’s do that!” This is sort of what happened with Dragon Age: Inquisition, that has a beautiful, but ultimately padded or “empty” world. If you are going to make your game huge, don’t do it just so people think, “Wow this game is huge!” Chrono Trigger and Baldur’s Gate were also a pretty expansive game, but it never felt unmanagable.

Mass Effect: Andromeda had some issues, but was not the worst game ever, and screaming about its graphics detracted from some of the actual production issues it suffered from. Final Fantasy XIII is not a bad story, because I’ve now played the beginning of three Final Fantasy games (including Final Fantasy VII) and they all amount to having one hallway that you have to walk down and fight stuff. Dragon Age II had a solid story and did a lot of things right, despite the distracting copy/paste environments. Let’s stop bellyaching about things to get a click, a view, a subscriber, and go back to actually critiquing games so they can improve, not just get torn down if they aren’t perfect.

5. Yearly game releases in a franchise

Just… why? Why is this a thing, other than to make money? I’m not sure if it bothers me more that this happens, or the hypocrisy of people complaining about it and then buying the yearly releases anyway.

This is absolutely a list I compiled by looking at my games collection, and while this doesn’t come up too often, when it does, it’s a glaring problem. Spec Ops: The Line is one such game, although fans will tell you the bad controls are actually a good thing, because it… somehow symbolizes the mental state of the character or something. When I press ‘X’ when the screen says “Take cover,” I would like my character to take cover, immediately, every time, not sometimes immediately and sometimes after he’s had a bit of a think and a coffee break to mull the request over.

Kingdom Come: Deliverance is another game I have some control beef with. The camera controls being mixed in with combat controls was ridiculous. The right anologue stick, again, did not always respond to direction accurately, and poor Henry responded to direction as quickly as if I was there shouting at him from the sidelines, rather than being inside his head like first-person implies. If a main character were to have only one job, that job would be to act as an extension of myself in the game world, and I don’t have to send a postcard to my hands kindly asking them to work and hope they do what I ask, when I ask it.

I’m on the fence about controls that make you use special super-secret abilities (Inquisitor senses, Witcher senses, dowsing abilities, etc.) to find otherwise-unfindable plot points. When used well, I think they can be a very interesting mechanic, but this does have the potential to be obnoxious, so it only gets a little paragraph.

I talked about this a lot more before, and my stance then was “DLC isn’t so bad” (seriously, go read the article if you haven’t), but the way DLC is implement now I often just can’t stand it. I know production costs are up and capitalism is a thing and bla bla bla but don’t charge me “full price” for a game that isn’t a full game. 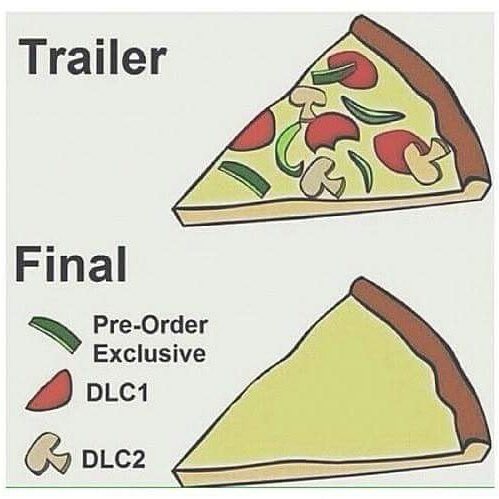 You want to offer extra stories beyond the original game so players can muck about in the world more? Sure, go ahead. I loved my Dragon Age: Origins DLC, after all. You want to pay 70 real dollars to purchase a diamond unicorn named Princess Shimmy-Shine for your playable character to ride around on? Sure, I guess that’s fine too. But don’t ask me to pay $60 for a game and then another $40 in order to get the rest of the actual, canonical story.

Why? Why? Why ask me to practice all of this stealthing and then ask me to run in guns blazing into a boss battle? Boss battles are there to test the skills you’ve learned leading up to that point, which means if you’ve been playing a stealth game, the boss battle should include the same mental acrobatics that you’ve been honing up until that point.

Double “boo” on you if the game requires you to level up, like Deus Ex: Human Revolution, and you spent most of your points on stealth so you are really ill-equipped for the boss rights.

It’s 2018! Why is this not something we can do, yet? I can stream from my console, take screenshots, have multiple save files, skip between programs with a touch of a button, purchase games digitally, and talk about all of it on social media at the same time. Why can’t I organize my multiple save files so I actually know what’s what? Maybe I want to have different files for different decisions in an RPG. Or maybe I want to write myself a note about what I was doing. For goodness sake, I was able to do this in Baldur’s Gate, so why can’t I do it in modern games, too?

This is by far my number one pet peeve when it comes to gaming….

What about you? Are any of these your pet gaming peeves? What is your number one pet peeve about gaming? Let me know in the comments!