I admit, I am rather unhappy that my work schedule didn’t permit me to launch my Dragon Age Month plans to celebrate the 10 year anniversary of Dragon Age: Origins, but never fear, it has been rescheduled for a later date. I promised you would be inundated with Dragon Age posts the same way you were buried in Mass Effect posts, and I intend on making good on my promise.

But that is for the future! In the present, it is Dragon Age Day, and we are celebrating my favorite game and my favorite series!

I have a confession to make. The reason I decided to play Dragon Age: Origins was because my graduate school held a concert featuring music from video games, and I fell in love with the music they played from the then-upcoming Dragon Age: Inquisition. When I went back to my apartment and looked into the game, I found out it was part of a trilogy, so naturally I decided to start at the beginning so I would understand the entire story.

The rest, I suppose, is history.

I loved Origins, overall liked Dragon Age II, and couldn’t wait to sink my teeth into Inquisition. I played the first two in between my first and second year of graduate school, and celebrated completing my classes by booting up Inquisition. It was so very, very hard to wait from December all the way until May, but I managed.

It’s a testament to the storytelling how excited I was for the third game after playing through the first two. I had already started my fanfiction at this point, so I guess you could say that the series had gotten me, hook, line, and sinker.

I thought a lot about how I wanted this post to go, and how I could present it without making it sound gimmicky. But I’m not sure I can. So I am going to just tell you a story.

Dragon Age: Origins was the game I needed, right when I needed it. I was coming off my first year of graduate school, and was stressed and depressed and considering if I wanted to continue the degree at all. I had made a plan that no I would give myself two weeks to do anything I wanted – or nothing if I so desired – with no judgement, in a type of mental and emotional vacation for my brain. It was during this time that I popped in Dragon Age: Origins and heard the title screen music for the first time.

I quickly chose the Dalish elf origin, named her Serafina after another character I had written a(n unpublished self-insert) fanfiction about, and played through the entire game in less than three days. It took me 65 hours to complete the game the first time; it’s not something I recommend doing, but playing that game non-stop was probably one of the best things I could do for myself.

I was interested in the story, and hooked on all the characters and invested in their stories. During that two-week period, I played through Dragon Age: Origins five or six times, back-to-back-to-back.

To this day I’m not sure what about the game spoke to me so strongly at that point, but I think it was an immersive story that pulled me out of my own life and into someone else. It gave me characters to slightly obsess over, which I know from past reading experiences is a way I deal with stress, and provided me a creative outlet in the form of loving it so much I wanted to write a whole fanfiction about it, this time about my canon Warden, Renya, who knew significantly more about RPG mechanics than her predecessor.

I wrote an entire post on the emotional side of this game, as well, so I think what it comes down to is the game provided me with so much that I needed that the physical world just… wasn’t.

Coming off of that gaming experience I went right into the Awakening DLC, Leliana’s Song, Witch Hunt, Golems of Amgarrak and even Darkspawn Chronicles, before swinging into Dragon Age II. I admit that my relationship with the second installment was a little rocky, as I didn’t appreciate the copy/paste environments and the hack-n-slash feel of the battle sequences – particularly when suddenly more baddies would literally pop out of nowhere for another wave of fight.

But the story was great, the characters were again deep and fantastic, and I sunk hours and hours into exploring Kirkwall. It was, by all accounts, a good story sequel and my appreciation for it has grown since I got over the “wanting more Origins” idea I had going into it.

And then Dragon Age: Inquisition happened. I really, really liked it. I wrote another article about how Inquisition built on Origins, and I stand by what I said: it is a solid game with so much to offer, and built on what made the series good so very well. And like I said, this was the game that I looked forward to finished after graduate school coursework had finally been completed.

What struck me the most was how drawn I was to the familiar characters. Obviously my Warden-heart was happy to see Leliana and absolutely fascinated by the changes she had undergone in the ten in-game years. Even Cullen who I didn’t like in Origins or DAII, and still refer to as discount-Alistair, was great to see and to discover how life had changed him.

Looking back, the story was good, and I could wax poetic on Corypheus as a villain. Solas and my Inquisitor were best friends, and my favorite part of the entire game was interacting with the people at Skyhold (and the entire mission at the Winter Palace… I am here and ready for more intrigue!).

If I had to boil down what the Dragon Age series means to me… It would be easy to say that the characters are my friends, or the story is interesting and immersive, or that it changed my life. But really, at the end of the day, Dragon Age is one thing that can always bring a smile to my face, no matter what else is going on, or how poorly I may feel. 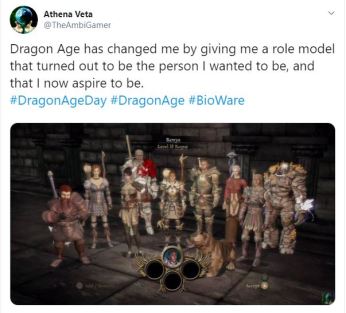 And that’s no small thing, is it?

Do you have fond Dragon Age memories? Let me know in the comments! I’m always ready to chat Dragon Age!